Home Latest News Chandigarh & Around Chandigarh is All Set To Have Helmets Compulsory For Women, Except Turbaned...
Facebook
Twitter
WhatsApp
Email 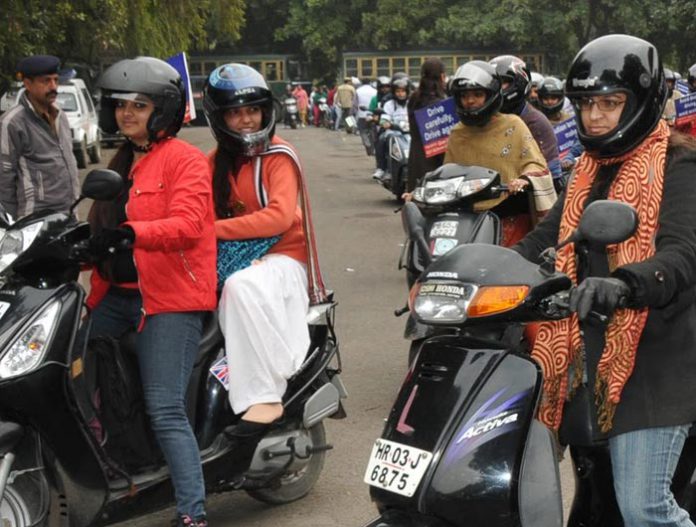 Keeping the safety of women riders on roads in high regard, Chandigarh will soon have have mandatory helmets for all female two-wheeler riders barring “Sikh woman wearing a turban (keski)”.

On Wednesday, the traffic management panel of administrator’s advisory council made the official recommendation to execute the rule.

In December 2017, the Punjab and Haryana High Court took a suo motu note on the issue basing it on the letter by a law researcher, Anil Saini. In the past three years, 24 women riding two-wheelers have lost their lives and 85 have sustained injuries on Chandigarh roads. The high court, thus, asked the administration to consider measures to contain road fatalities involving two-wheeler women riders.

The UT has proposed amendment in Rule 193 of the Chandigarh Motor Vehicle Rules, 1990, and has invited objections and suggestions.

The Motor Vehicles Act, 1988, mandates headgear for all who are riding two-wheelers, but permits state governments to make relaxation for some categories. It is under this rule that the UT has exempted all women. However, Punjab and Haryana has excluded only Sikh women, though it has not been clarified how they will be identified.

Sensitivity of the issue

It was in 1998 that the HC had restricted the exemption only to “Sikhs wearing turban while driving”. However, it met with resistance from Sikh bodies and city witnessed protests. Sikh bodies had argued that their tenets forbid the wearing of any cap. In 2004, the Supreme Court too ruled that the state had powers to relax rules in a particular area. Following this, Chandigarh relaxed the norms and exempted all women.

Initially, after the HC’s order in December 2017, the UT was mulling to make helmets mandatory for all women and give exemptions as per the Act only. But given the sensitivity of the issue, it later decided to take legal opinion. It is reported that UT’s top law officer Suvir Sehgal advised the administration that according to the Delhi HC’s interpretation of the 1988 Act, only Sikh men are exempted, and to make any other exemptions, the UT will have to make desired changes in the rules. Sehgal had advised against making helmet mandatory for all women.

ChandigarhX opinion on the issue

The general conception is women riders are way more careful than men. That’s a naive argument. Even if we accept it, roads have not just girls riders. Accidents happen due to others’ negligence too. We can never rule it out. After all, a helmet is for our own protection. Their skulls are no-iron made to withstand fatal accidents. Bandit-queen-look is not going to save them.
Rest, if makeup is dreaded to be spoiled, it is better to risk powder than life.