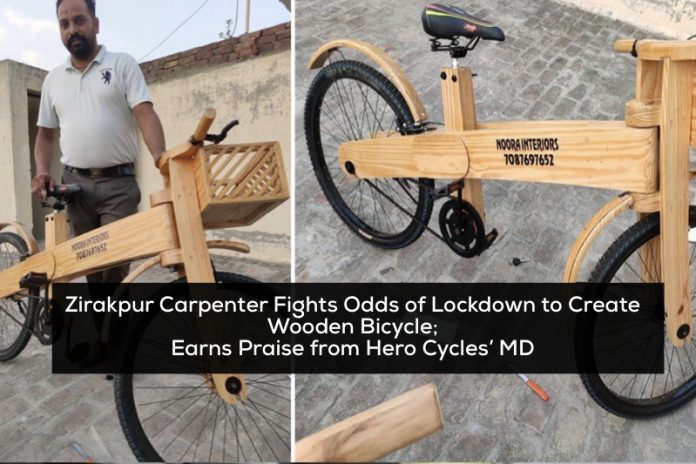 COVID-19 pandemic and resulting lockdown has made us stand eye-to-eye with our fears and insecurities. We have started valuing everything that were hitherto taken for granted. Undoubtedly, the underprivileged and economically weaker sections were severely hit. With their small businesses closed, services and labour uncalled, has left them most vulnerable.

However, some individuals shine like a silver lining giving us hope and reaffirm our faith in ‘turning stumbling stones into stepping stones’.

Such is a 40-year-old carpenter, Dhani Ram Saggu, from Zirakpur whose only source of livelihood was lost as his shop ‘Noora Interiors’ was shut down due to lockdown. Instead of slipping into stress and anxiety, he chose to engage his mind in more productive and creative ways, learn new skills.

The Idea And Execution

He used the scraps, raw material, spare parts lying around his house and decided to give a quirky spin-off to a bicycle, he decided to make a wooden bicycle.

In the first attempt, he fought against his own scepticism over the whole idea as it was not his domain as he had been making cupboards, doors, furniture for 25 years. He dismantled an old bicycle and attached the parts on plywood frame. But, it was very heavy and uncomfortable, still he found himself 50 percent successful in his attempt and was more zealous. Again, he improved upon it by using local available Canadian wood, mudguards, basket and only in third attempt he was successful.

It took him four months to complete his wooden bicycle and now he is getting orders from Gobindgarh, Jalandhar, Moga, Delhi, Gujrat, Chennai and South Africa, Canada.

Dhani Ram says that a person can travel up to 25-30 kms a day on the bicycle and being water-proof, riding it in rainy season would not be a problem. It is open to customisations according to clients’ comfort and preferences.

The cost of the wooden bicycle is Rs 15,000, delivery charges and other logistics to be borne by the client.

To place an order or more information on Dhani Ram Saggu’s wooden bicycles, you can call on 7087697652.