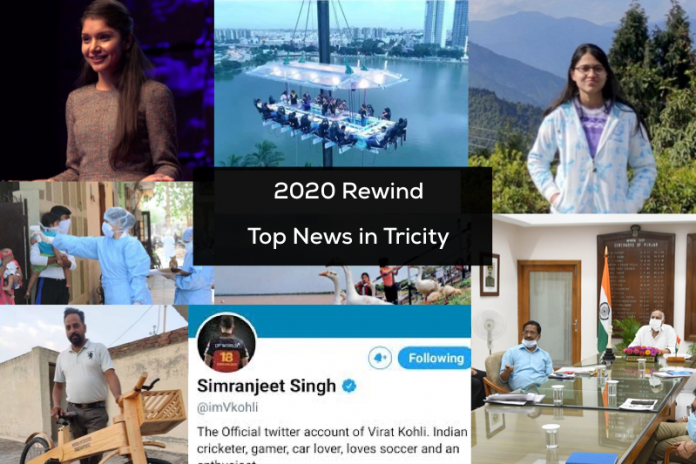 Largely 2020 is going to be remembered to be forgotten for the pains of coronavirus we witnessed across the globe. Still, let’s rewind and see the top stories in tricity, Chandigarh, Mohali and Panchkula.

Chandigarh’s Pritika Mehta has been chosen as the TEDx Ambassador by TED, only Indian wearing this prestigious cap this year. A data scientist, entrepreneur, TEDx speaker, World Economic Forum Global Shaper, Queen Elizabeth’s Young Leader, TEDx Chandigarh curator, she is a power woman who at such young age is re-scripting women’s role in the world.

After more than fifty years, the number 13 is eyeing a debut, with the UT administration approving to rename Manimajra as Sector 13. A western superstition associating 13 with ill-fortune prompted Le Corbusier to have nothing do with it.

The first confirmed case of COVID-19 has been reported in the city, where a 23-year-old woman has been tested positive for the new coronavirus on Wednesday. As per city’s state surveillance officer Dr Upendrajeet Singh Gill, the Chandigarh-resident of Sector 21 had recently returned from England. The patient had reported at the Government Medical College and Hospital (GMCH), Sector 32, after complaints of cold and fever at the Amritsar airport on March 15.

A 30-year-old ward boy of GMCH-32 who was COVID-19 positive hosted a party at his residence in Bapu Dham Colony (Sector-26) flouting lockdown norms and social distancing guidelines. Expressing deep concern, the act forced Administrator VP Singh Badnore to initiate criminal proceedings against him. This led to spiral of covid cases from the area which gave sleepless nights to the administration.

The contacts of the positive cases were kept in their houses till they also tested positive, the report said.

Later, in an official statement from PGIMER, the comparison has been retracted. The premier medical institute clarified that any survey comparing the parameters between slum dwellers in Dharavi and Bapu Dham Colony was never in its purview as asked by the UT administration.

Sukhna is now a Wetland

UT Chandigarh administration issued final notification declaring 493 acres of Sukhna Lake as wetland under Wetland (Conservation and Management) Rule 2017. It means that no encroachments, setting up of any industry, waste dumping, discharge of untreated waste and effluents or any construction of permanent nature within 50 meters of the lake is banned.

The owner of Pizza Sailorz in Sector 23, Chandigarh, Amandeep Singh found a purse ouside his eatery on Sunday afternoon. What he did next gave the glimpse of his examplary honesty. He opened the purse in front of CCTV camera installed outside his restaurant and made sure other shopkeepers were present when he did that.

Nearly 75 gm of gold ornaments were there in the purse worth Rs 4 lakh. A resident from Dadu Majra who was an artisan working with a goldsmith came to claim it. He gave exact number of items in the purse and even told about Rs 35 in the purse.

Impressed with his good deed, Sector-23 market association has issued a letter of appreciation to him.

Panchkula girl, Kritti Sharma, has scripted history with her team of IIT-Bombay students. They have discovered closest ever asteroid to pass by earth without impacting it.

Named 2020 QG, the newly discovered SUV-sized asteroid passed 2,950 kms above the earth’s surface on Sunday and was surely close enough that earth’s gravity did change its orbital path. The previous record was held by asteroid 2011 CQ1 which was 5,500 kms above earth surface.

To honour COVID heroes, Virat Kohli changed his Twitter handle name to Chandigarh-based Simranjeet Singh and wore Simranjeet’s name on his jersey during one of the matches of the IPL 2020.

Standing strong by the specially-abled, Simranjeet Singh, a resident of Sector-63, Chandigarh, and his friends, Nitesh Sharma, Vikas Jain and Anu Sehgal, raised more than ₹98,000 for deaf and hearing impaired persons during lockdown period in May-June early this year.

They distributed ration kits for the hearing impaired persons and children staying in different slums and Vatika Public School in Chandigarh so that no one sleeps hungry.

A 40-year-old carpenter, Dhani Ram Saggu, from Zirakpur whose only source of livelihood was lost as his shop ‘Noora Interiors’ was shut down due to lockdown, used the scraps, raw material, spare parts lying around his house and made a wooden bicycle.

Under the auspices of Chandigarh Smart City Mission project, Water ATMs are to be installed in the city to provide drinkable water at cheap rate. In the first phase, these vending machines will be installed in Sector 35 market, 43 and, district courts. Later, vending machines will be installed at other places including, Sector 22, 17, Sabzi Mandi. However, the project has hit a roadblock as not even a single agency showed any interest to take up Rs 50 lakh project on the PPP (public-private partnership) mode in the recent tendering process.

With the view to contain the spread of COVID-19, Chandigarh administration imposed blanket ban on bursting of crackers on Diwali. With crackerless Diwali, the air quality improved.

The proposal is to open a restaurant hanging at a height of 165 ft from a crane. It will have capacity of 24 persons at any given time.

Chandigarh to get second medical college

UT administration has pushed for a second medical college for the city at GMSH-16. The proposal for the same been sent to the central government.

In a bid promote tourism, CITCO is going to boating in Sector-42 lake with start two and four-seater paddle boats in the first phase.