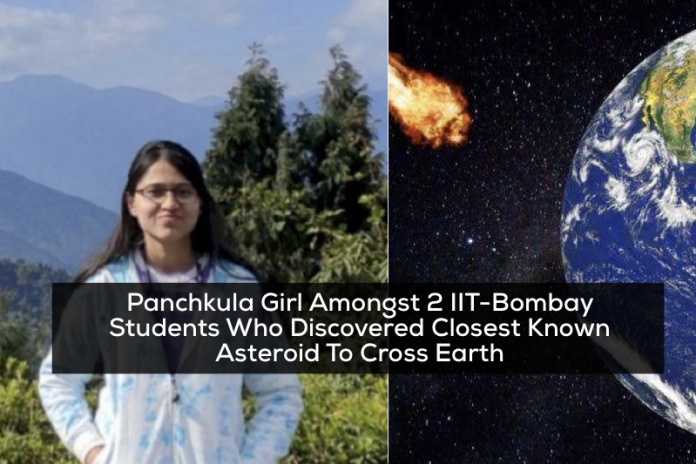 Panchkula girl, Kritti Sharma, has scripted history with her team of IIT-Bombay students. They have discovered closest ever asteroid to pass by earth without impacting it.

Named 2020 QG, the newly discovered SUV-sized asteroid passed 2,950 kms above the earth’s surface on Sunday and was surely close enough that earth’s gravity did change its orbital path. The previous record was held by asteroid 2011 CQ1 which was 5,500 kms above earth surface.

The Team and the Project

The duo had zeroed on five ‘streaks’ in the data as potential asteroid which was conveyed by ZTF to International Astronomical Union Minor Planet. Later their findings were confirmed.

Since Kritti had joined the project much later after getting background training, she is thrilled to have achieved the momentous success within few days of the project.

Next, this team will be studying these objects with the robotic GROWTH – India telescope located in Hanle, Ladakh.

Located in California, ZTF’s prime task is to scan northern sky every third night looking for supernovas, erupting stars and other such moving and changing objects in sky.

As a NASA-funded program, ZTF is searching for near-Earth asteroids. Armed by state-of-art technology, over a lakh pictures of moving space rocks, captured as streaks, are sorted automatically and best potential asteroids are followed up by researchers. That roughly counts to 1,000 images to sort by eye each day.