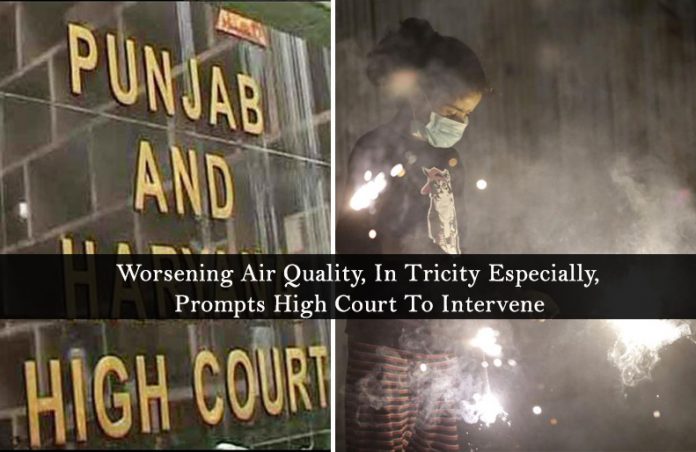 Diwali is still a week away, but you can already see haze in the sky, a disturbing smell in the air, sore throat, itchy eyes.

On October 9 the Supreme Court ordered a ban on sale of firecrackers in Delhi National Capital Region (NCR) till November 1.

Pollution level in the tricity and many cities of Punjab and Haryana is worsening absymally. This has led Punjab and Haryana High Court to suo moto take cognizance of the deteriorating air quality. It has sought information related to the licences for explosives, including fireworks, from the home secretaries of the region.

A division bench of Justices Ajay Kumar Mittal and Amit Rawal  has appointed senior advocate Anupam Gupta along with advocate Ashok Kumar as amicus. They have been directed to supply the information with regard to issuance of explosives licences whether temporary or permanent.

In his 5-page note, Justice Rawal pointed out, “Being the festive season of Diwali, I am of the view that it is high time the court take cognizance of the alarming increase of pollution, resulting in a health hazard, particularly in persons who have respiratory problems. The SC has already issued guidelines in its order, released on October 9, with regard to prohibition of use of compounds of antimony, lithium, mercury, arsenic and lead in the manufacture of fireworks and use certain other materials which are permissible.”

Akin to Fundamental Right to Life

Bursting of crackers fill the entire atmosphere with smoke and even before Diwali, it is already difficult to step out of the house past 10 pm. Justice Rawal observed that though the “right to breathe is not a fundamental right but akin to it.”

Justice Rawal also said, “No doubt, the schools and NGOs have been sensitising the children and the members of society about the aftermath and the worst effect of pollutants being emitted owing to the burning of the crackers. Even it results into burn injuries and the hospitals are flooded with patients having various respiratory problems other than burn injuries.”

Delhi is not alone suffering with bad air quality, Tricity too

Stating that it is not just Delhi where the air quality deteriorates after the Diwali celebration, Justice Rawal said the cities of Punjab and Haryana and particularly the Tricity are also affected by the pollution.