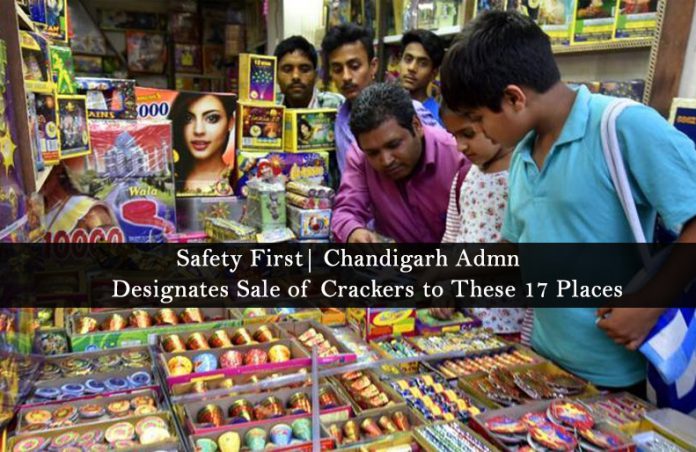 Keeping in view the safety concerns on unchecked selling of crackers around Chandigarh, even in the most crowded markets and places, the UT administration has defined the sites where crackers are allowed to be sold. Most of the sites are away from the heart of the city where threat to life and material losses is the least.

The approved sites for sale of crackers in Chandigarh are:

♦ In front of fire station, Manimajra

Is the Crackers Dealers’ Association happy?

The association has maintained that earmarking sites that too away from market will hamper their business which is already suffering due to GST and demonetisation. It will also add to woes of customers who will have to travel far off to buy crackers.

“For the past many years, we have been setting up stalls in our markets. We, small traders, do not have manpower which may be deployed additionally at these sites nor does the administration want us to close down our shop and then sell crackers”, retorts Chirag Aggarwal, general secretary of the Chandigarh Cracker Sellers Association.

The association has been protesting against the move of earmarking sites for past many days. It even approached MP Kirron Kher for her intervention in the matter. It demands increasing of sites from earlier 8 sites, allowing sale of crackers outside shops and inclusion of specific sites in the list, among others.

What is the UT administration saying?

Additional Deputy Commissioner Rajeev Gupta has said, “We are also concerned about the safety of the city.”

GUIDELINES BY THE UT CHANDIGARH ADMINISTRATION FOR CRACKERS SELLING SITES

→ 17 sites in Chandigarh have been earmarked for crackers selling.

→ Fire brigade must be stationed at each identified site.

→ Not more than 50 stalls would be put up at each site.

→ No selling of crackers outside shops.

Let’s not burn away our celebrations in smoke this Diwali. Live the pious spirit of Diwali rather than bursting your happiness in crackers. We all are sensible and educated enough to understand the implications of our couple of hours ‘display of happiness’. Let’s come together to celebrate a Green Diwali with family, friends and diyas.

Source: The Indian Express and HT