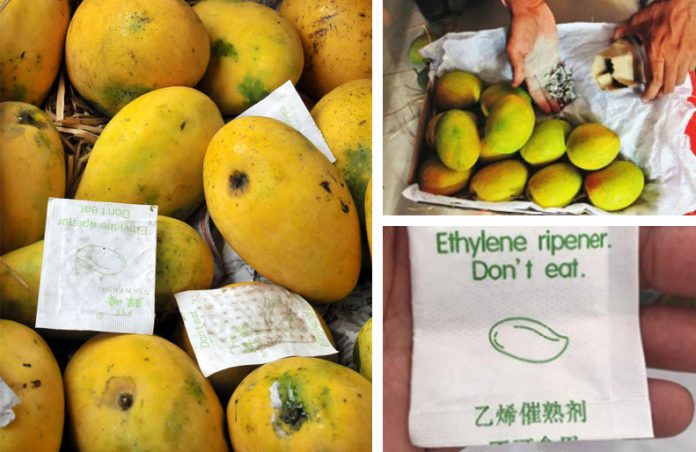 Recently in a raid at Sector 26 the fruit and vegetable market in Sector 26, administration’s Health and Police team found rampant use of calcium carbide, a dangerous carcinogenic for artificial ripening of fruits, which led to an uproar in the city. The administration took serious and strict actions to curb the use of calcium carbide. However, within a month, the traders have successfully found a replacement to it, Chinese ethylene powder.

The sachets of the Chinese ethylene powder are scattered all over the place after being thrown out of cartons used to transport mangoes.

The traders claim the use of the Chinese ethylene powder is allowed, officers of the Health Department are waiting for a report of the Food Safety and Standards Authority of India on it.

Sources said besides the Chinese ethylene sachets, the use of calcium carbide had not stopped completely in the  market despite the crackdown. While checks are being carried out at the mandi, there is no check in apni mandis  where ‘masala’  is mainly used for ripening of mangoes, bananas and papaya, and sometimes also for cheeku and tomatoes.

The ethylene is in the form of a starchy powder, which slowly releases ethylene gas that causes mangoes and other fruits to ripen. While the actual process required five to six days for repining of fruits, “with the use of calcium carbide, it takes a few hours to ripen these”.

How to identify artificially ripened mangoes

Please be careful when you buy veggies and fruits! Ethics seem to be hold no place in this materialist world.

UPDATE: Ethylene is considered the safest option to artificially ripen the fruits and veggies, only if used within a limit.

The FSSAI in its August 2016 gazette notice made clear “Provided that fruits may be artificially ripened by use of Ethylene gas at a concentration upto 100 ppm (100µl/L) depending upon the crop, variety and maturity”.

Ethylene becomes toxic if amount used is >33% and must be used under controlled temperature and humidity levels.

But, the bigger questions still remains unanswered are

ARE THE TRADERS ADHERING TO THE LIMIT?

IS THE CHEMICAL IN THE SACHETS ETHYLENE OR SOMETHING ELSE?

Source: The Tribune, The Hindu

Unchecked Use of Carcinogenics Found at Sector 26 Veggie & Fruit Market