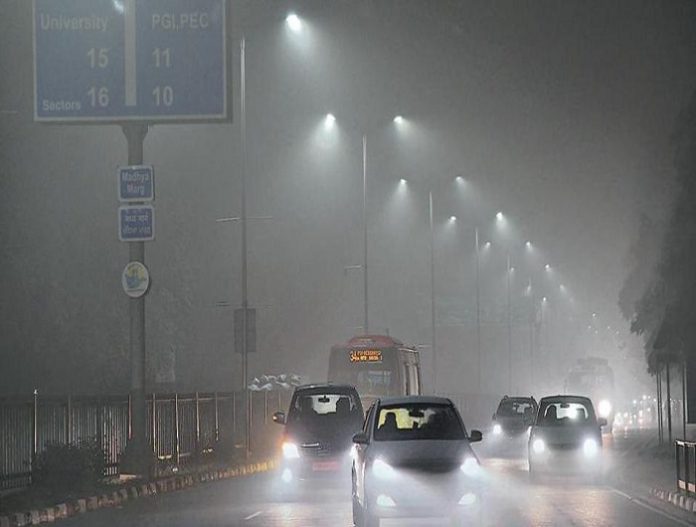 On Wednesday, Chandigarhians had a bravery test to undergo. With fog covered morning to temperature touching 7°C, Chandigarh weather left everyone with chattering teeth.

The maximum recorded temperature was 20ºC, while minimum temperature dropped to 7ºC.  Averaging at 14.5, the temperature was six degrees below normal. Dense fog still continued to engulf whole of the Tricity. The temperature has dropped by four degrees in past two days. Met Dept. has predicted continuation of cold wave without any rains.

Many flights have been cancelled and rest running delayed. Trains too are running behind schedule. In fact, Kalka mail was delayed by 18 hours.

14 Trains and 13 Flights Delayed due to Poor Visibility

On Wednesday, the morning Shatabdi (12011) was delayed by two hours, while on Tuesday, it was 9 hours late. Kalka Mail was delayed by over 18 hours. Air operations were also disrupted due to low visibility in morning. However, no flight was cancelled. But still, 13 flights were delayed because visibility in the morning was quite bad. The operations could only resume after 12 pm.

An Airport spokesperson said that situation of air operations on Wednesday was much better. Passengers were advised to check their flight status with respective airlines before leaving for airport.

Met Dept. has predicted a dip in morning and night temperature by one to two degrees in the coming days. There is no possibility of rains. Fog will engulf the Tricity for next three days, particularly in mornings and evenings.