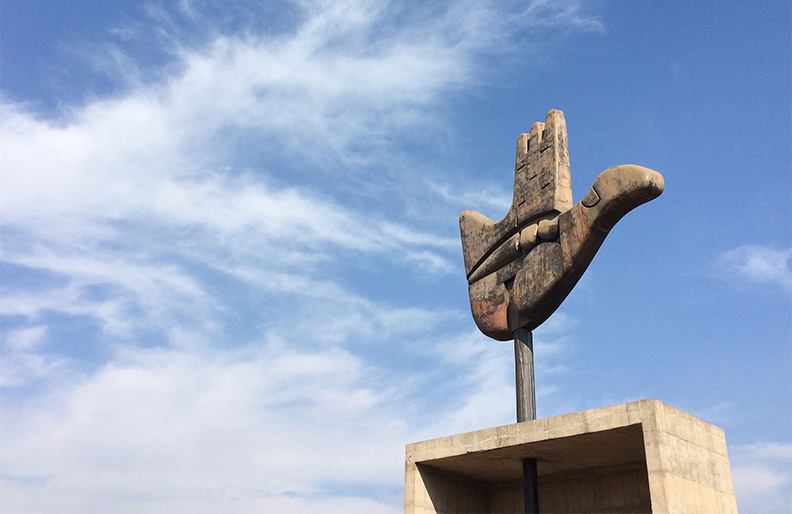 The official emblem of Chandigarh administration (only UT or state in the country to have its own emblem), the ‘Open Hand’, that stand proudly in Sector 1 Capitol Complex and many other places around the U.T., do you really know the story behind it?

What’s the meaning of Open Hand?

I’ve heard people saying that it replicated the Chandigarh’s initial layout plan on design-board, but it’s not even close to that.

To understand, let’s time travel to 1948 when Le Corbusier started working on creating a new town in the Shivalik’s foothills…

The world is witnessing the back to back multiple catastrophes of world wars, Hiroshima & Nagasaki holocaust, Jews genocide, India’s partition and what not. There is bloodshed, deaths, distress and destruction everywhere. In such a scenario, Pt. Nehru wanted to create a new town to resettle the victims of partition with a vision that promises hope for a better tomorrow. And, Le Corbusier, the architect of Chandigarh, thought of designing a monument that conveyed peace and reconciliation, and the unity of mankind. Open to give and open to take – an eternal openness towards new knowledge.

He had conceived and designed this beautiful idea as early as in 1948, but it took decades to pass through the meandering administrative corridors to materialise. When Nehru heard of this idea, he even thought of using it for Non-Aligned Movement. But, Le Corbusier’s dream was still to see the light of the day. He even wished to install it atop Bhakra dam, but it was declined.

Finally, installed in 1985 at Capitol Complex

Finally in 1985, (after 20 years of Le Corbusier’s death) ‘Open Hand Monument’ was finally inaugurated in Sector 1. The 85-feet high metal-made rotating ‘Open Hand’ stand resolute against the majestic and eternal Himalayas in the Capitol Complex, overseeing the ‘Trench of Consideration’. The trench is designed like the Greek open amphitheatre for people to gather and discuss, debate and contemplate. Since every issue has two sides, thus the two entrances. And those of you, who thought the rotating Open Hand was a weathervane, correct yourself now. The meaning here is deep too. It symbolises the eternal change in our lives.

Now, go to Capitol Complex and appreciate the ‘Open Hand’ in its true sense.

Related: Did You Know Chandigarh Was Originally Designed To Be Like Delhi?