Home Events, Fairs & Fests Literary & Cultural Get Inspired to Give the Wind Beneath Your Wings at TEDx Chandigarh
Facebook
Twitter
WhatsApp
Email 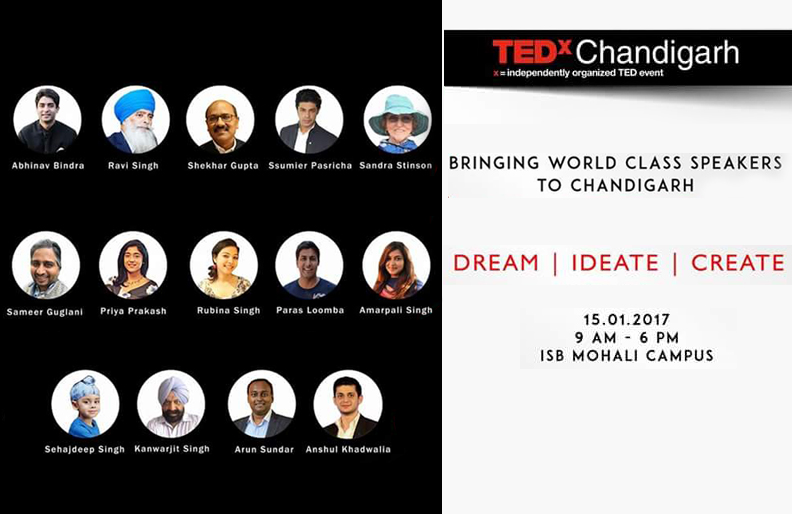 TEDx Chandigarh is definitely the most awaited event ever in Chandigarh history. It’s matter of pride for all of us that we finally have a coveted podium in our City Beautiful’s name that showcases to the world that Punjabis are much more than bhangra, giddha, Yo Yo songs, gedi routes. We do have, though not-much celebrated, intellectual prowess to boast about. TEDx Chandigarh is dedicated to develop a like-minded intellectuals’ community that becomes the bearer of intellectual revolution in the region.

The spark to the said ‘intellectual revolution’ is going to be lit at ISB Mohali Campus on January 15, 2017. The distinguished faces from all walks of life are going to share their inspiring stories. 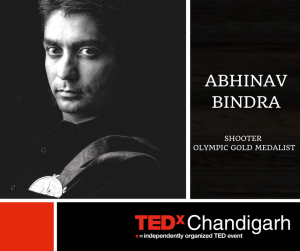 The man needs no introduction. India’s first ever individual gold medal winner at Olympics Games 2008, World Championship 2006 title holder, 5 times Olympian, 8 times National Champion and the youngest shooter in the whole world to compete in Olympics, Abhinav Bindra is a role model and a benchmark for aspiring marksmen.

Watch him talk about his journey and experiences LIVE at TEDx Chandigarh. 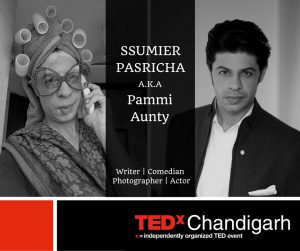 The man behind the ‘Pammi Aunty’ face in the satirical videos that have become a rage over the social media is coming to TEDx Chandigarh to tickle your funny bone and at the same time make you think about the hypocrisies in our society. 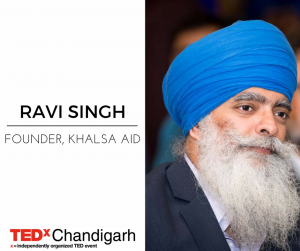 An internationally acclaimed humanitarian and founder of Khalsa Aid, Ravi Singh strongly believes in Sikh principles of ” Sarbat Da Bhalla” ( Well being of all) and “Recognise The Whole Human Race As One.” He will be sharing his stories to provoke, ignite and inspire the humanitarian amongst us all. 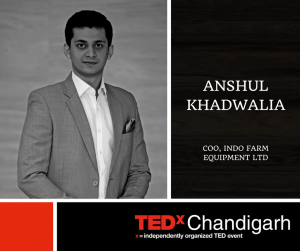 Where jobs in big IT based MNCs attracts the youth in India the most, Anshul Khadwalia is an example of someone who took the less traveled path. He dedicated his efforts towards Farm Mechanization and bringing the best of products & services to the rural masses of the country. Currently, Chief Operating Officer of INDO FARM, organization that manufactures high quality agricultural equipment and industrial machinery, Anshul has achieved all this in just a tender age of 26. 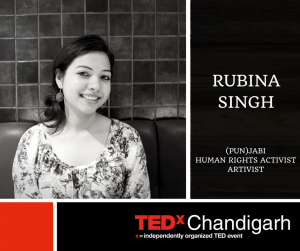 A satirist, story-teller, comedian, human rights activist, Rubina is wearing all these hats. She firmly believes in the power of stories to change the world. Recently, she is being involved in peace-building process through her initiative like Dilli Heart and Pinku and Friends, a virtual space for stories of humour and compassion through puppetry.

The man who brightens the hills-PARAS LOOMBA 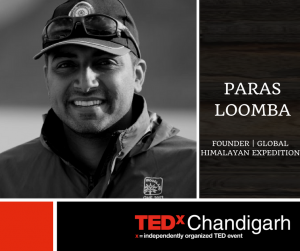 An engineer by profession, Paras merges technology and passion with an approach to create social technological innovations that are efficient and self sustainable. He is the founder of Global Himalayan Expedition (GHE) and has lead several leadership expeditions to Ladakh to provide clean energy and education access to remote off-grid communities. He was also a team member of the 2012 International Antarctica Expedition led by Robert Swan, OBE, the first person to walk to both the poles. GHE’s work has been highlighted by IEEE Worldwide and featured by National Geographic as one of the “Breakthrough technologies” in the present world.

Catch him Live sharing his inspiring story at TEDx Chandigarh. 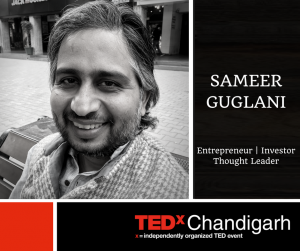 An angel mentor to over 300 entrepreneurs in the country, Sameer’s “The Morpheus” became India’s first ever Startup accelerator which developed a community of sharing ideas and knowledge. His “Oneness Community” is a platform that enables connections, sharing & collaboration between individuals who are learning and living from an ever deeper understanding. Currently the community has 215+ members who are creating transformative models to live & work in their personal & collective contexts. 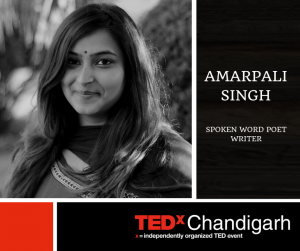 A live example of turning tragedies into triumphs, Amarpali had been surrounded with pain since her childhood. But, the ordeal only brought out the best from her. She became empathetic and sensitive to human suffering and began to strive to comfort them. She is a poet and a blogger who has brought light to her readers. 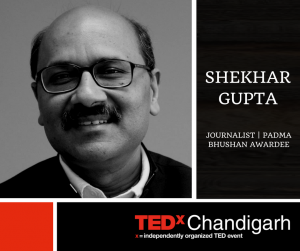 A renowned journlist, Panjab University alumni and Padma Bhushan awardee, Shekhar Gupta is one of the most credible and independent voices in the circus ring that Indian media has become now. His weekly column called ‘National Interest’ is a touchstone for new ideas in politics, governance, society, business and sports. With him at helm, The Indian Express won the Vienna-based International Press Institute’s Award for Outstanding Journalism in the Public Interest thrice. 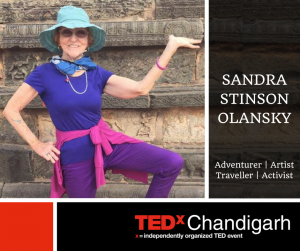 Sandra, a woman who broke the shackles of her mundane routine for 35 years and gave the wanderlust in her an expression. She is an art lover and traveled across countries appreciating the art and culture of the places. Living amidst people of different ethnicity and culture gave her the fervor to become a global ambassador of peace through acceptance and empathy. 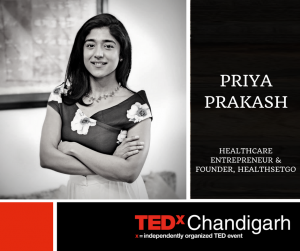 Priya Prakash is a healthcare entrepreneur and founder and CEO of HealthSetGo, India’s pioneering health organization with a vision to empower students and schools with tools that lead to healthy societies, healthy governments and a healthier planet. Additionally, Priya is a Global Shaper of The World Economic Forum, and a Fellow of The World Forum for Ethics in Business, wherein she undertakes many health projects for the underprivileged. 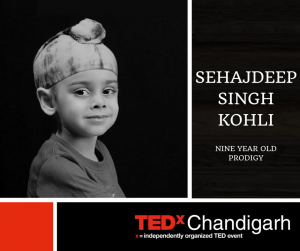 A nine year old prodigy with first Asian record at the age of 3, first rank in International Informatics Olympiad and recognized by the Worldwide Brain Club for his exceptional memory skills. 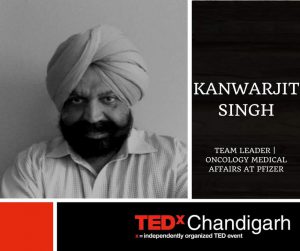 Kanwarjit Singh is a senior program official, Global Health of the notable Bill & Melinda Gates Foundation and team leader at Oncology Medical Affairs, Pfizar. He will share anecdotes of wisdom from his storehouse of amazing life-long experiences. 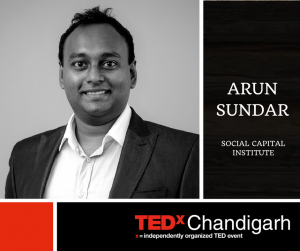 Arun Sundar is one of the eminent thinkers and opinion leaders in the technology space in Asia-Pacific. The outcome of his research has made him a staunch believer that while the social evolution has created multiple sub-cultures around the world, the neural evolution of man has unified the driver for both individuals and businesses alike to building what he believes is a new form of Capital which he believes it is the true measure an individual that an idea or a business venture should look at as their ultimate measure of success.
Alongside various technology endeavors, Arun is one of the key management team members who established the category of ‘Relationship Analytics’ globally as part of the venture ‘TrustSphere’ where he is their Chief Strategy Officer.

As the curator of TEDx Chandigarh, Pritika Mehta, says, “Be there or Be square.”

Buy your passes and learn the new and enlightened ways of life from the inspiring stories of TEDx Chandigarh Speakers.

Grab your passes at http://tedxchandigarh.org/tickets.html and stay inspired!