So, Holi is approaching. While this makes a majority of people happy, there are still a small portion of people (read:me) who would rather pack their bags and leave for Mars than go outside and pretend we aren’t thinking of strangling everyone’s happy faces. 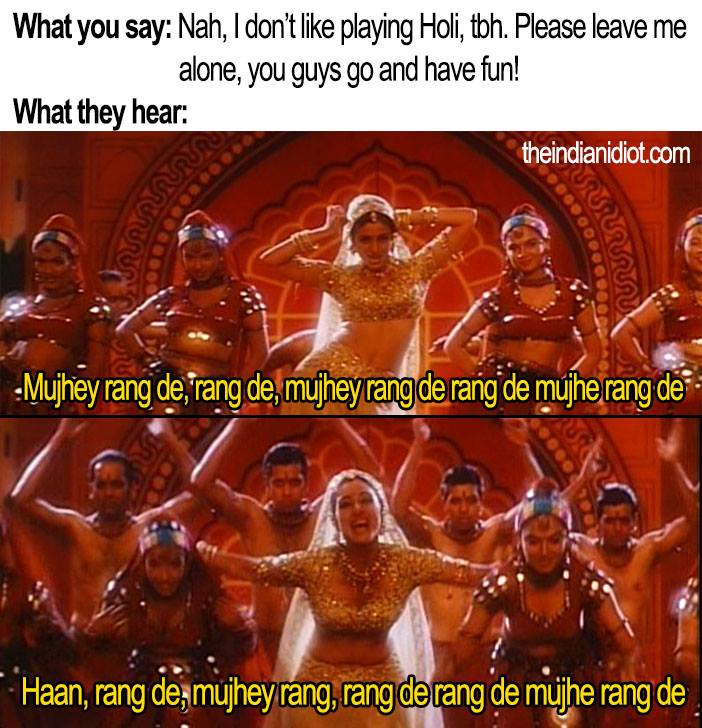 I get it. You love holi. I also know the kind of looks I get when I tell someone my real feelings about the mess created on this festival.

I have been called a ‘stuck up’ and told to ‘loosen it down a bit’. ( Tbh, the only thing I will loosen down will be my hands slapping you if you say that again!)

If I may ask, what is wrong with me not getting mad crazy about holi or not preparing to throw water balloons on every innocent person that thinks it is harmless to cross the street? (And kids. THE WATER BALLOONS FKN HURTS) Also, the not-so-funny-thing when you hear people going ‘Bura na maano holi hain’ while you are still reeling from the impact of the nuclear bomb that just blasted on your back makes me wonder, kitne pathar dil ho sakte ho tum log?

So, for all you people I have made a list of reasons why I want to be left alone on Holi. Read on!

Creepy guys with creepy smiles who have no idea what personal space means and their face screams “You’ll not like what I am going to do”. Next.

My Hair And Face

For someone who is obsessed with their hair, the thought of disgusting grease, chemicals, or mud makes me want to puke. It takes a 2 hour session in my salon to feel better about my hair, and let’s be honest. The efforts aren’t worth it. Also, people look like scary serial killers when they come back from playing holi.

I maybe called a spoilsport for this, but guys. You waste a hell lot of water on Holi. (Not to mention, taking a bath on holidays is a big NOPE) It is said that in 7-8 years more than 3/4th of India will be facing water scarcity. Is this worth it?

The cutest thing on this planet, take a moment and think about what happens to them on this festival.

People, holi looks pretty only in movies.
And why would you get your hair done and wear the most beautiful lehenga you own? AND WHERE CAN WE GET OUR OWN VARUN DHAWAN ON HOLI?
So unrealistic :/

It’s not like I hate holi. Love the food, especially the gujiya that my mom prepares. I am happy to watch you playing from afar.

HAVE A HAPPY AND SAFE HOLI!