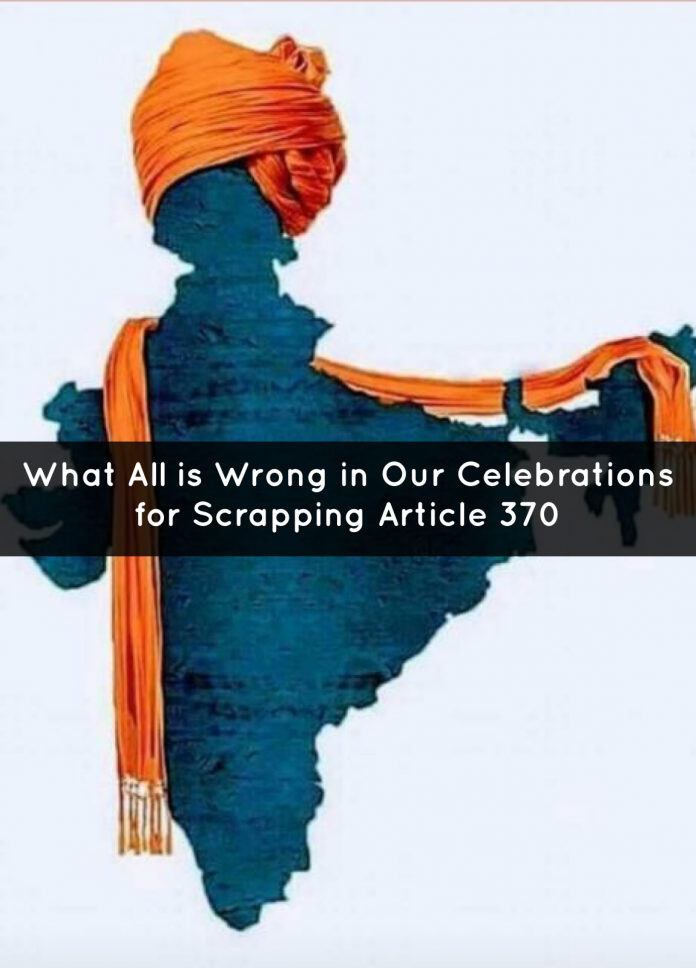 August 5, 2019- A historical day for India. Not only the Modi government showed the resolve to float a proposal on revoking Article 370 but also did get it passed in both the houses of the Parliament (though should have said “sailed through” given the mighty majority it boasts).

Scrapping Article 370 was definitely and undoubtedly long pending. Many constitutional experts, committees on federal relations in India have recommended gradually bringing Jammu & Kashmir at par with other states in India. Finally it’s been done. Whether it’s a right step or not, what are going to be the repercussions, let’s leave these things to “experts’ panels” on news channels to debate on. Here let’s ponder where we, the common man, the Indians, stand and are doing.

The decision has brought cheers across the nation, infact within seconds, it became the hot topic of discussion over lunch, evening tea, strolls, whatsapp group chats, twitter, facebook and before the end of the day, all became seasoned intellectuals with their ‘expert opinion’ ready on the matter. After all they dedicated hours of study to go through the historical background and constitutional provisions in the Social Media University.

Do we ever pause and think before reading and sharing messages further who’s the writer? Whether he’s got the complete knowledge on the subject? Do you verify the information?

Who’s got time for this!

We want information but “short please”, skip the details, only main headings!

No article in the constitution can be read in isolation. It requires a pragmatic mind to unveil legalities of the constitution and at the same time, an empathetic heart to understand and read between the lines.

Does our one minute class at Social Media University inculcate these things in its ‘students’?

And the result, we, the cognitive misers, jump to conclusions and then begins a series of disturbing memes, jokes that mock everything to lighten the atmosphere. Everything disturbing and disgusting is said under the garb of humour.

Same happened with this scrapping Article 370 and 35A, long series of videos, pictures, memes, jokes have been floated that can disturb any sane person.

Are we land-mongering hawks with our lusty eyes glued to occupying this pristine land?

More than a proud proclamation of ‘One India’, it has become a hashtag to boast India’s stake on J&K and that too to the world especially Pakistan.

Why in the world does it need to become a victory cry? We were not at war. We have not ‘won’ it. Keeping in consideration the religious demographic profile of the state, do you think it’s morally right to add religious connotations in it? (Don’t bring up the Right to Religious Freedom. Suggest you to read Fundamental Duties and Article 14 along)

Seriously! Has the state become one man’s or community’s property?

Does at any point the Kashmiris became our centre of concern?

O yes! once they did.

These memes and jokes are all the more dampening the positive impact the scrapping intends to make. The state of Jammu and Kashmir has always been a sensitive issue and the same sensitivity and sanity is required to provide a solution. Solution, our constitution makers had given in the constitution itself by keeping Article 370 as a temporary provision, but to make it sane and morally right is our responsibility – you and me.

The Jammu and Kashmir is not just gorgeous land but an inhabited state with over 1.25 crore people. Let’s extend solidarity to them instead of giving them the impression that ‘NOW you are completely annexed.’ Let’s be humane enough to give them their due respect and their due rights being an Indian. They are very much Indians like you and me. However, our claiming this won’t matter until the people there call themselves ‘Indians’.

Exercising restrain in our speech and ‘mocking humour’ is the need of the hour. This is a sensitive time in our history. Our actions right now can either prove the action of revoking of Article 370 a success or a blunder.

Rare Pictures of National Heroes Come to Life, Thanks to My Heritage’s Deep Nostalgia Tool

Indian billionaires’ fortunes increased by 35 percent during the lockdown while 12.2 crore Lost their Jobs: Oxfam Report