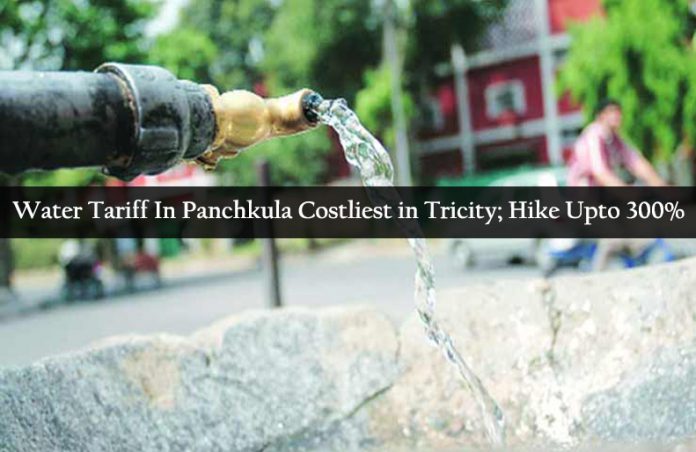 Water wastage is a major issue and we need an appropriate system to make sure that the residents do not use water above a particular level. But the point here is that the residents must be first supplied water properly on a daily basis, and in such scorching heat, water becomes the true elixir of our lives.

Let’s have a look at the water tariff in Panchkula.

A new water tariff has been implemented by the Haryana Urban Development Authority (HUDA), because of which Panchkula has become the costliest in the Tri-city in terms of water tariff.
As per the new rates, which have come into force from June 1, Panchkula residents will pay:

The hike in the residential slabs is between 100 and 300 percent.

Earlier, there were three slabs

Water tariffs in Chandigarh and Mohali

• In Chandigarh, the Public Health Wing of the Chandigarh MC had prepared a revised tariff plan, which would affect residents using above 60 kilolitres (kl) of water, but it was rejected by the MC House.

Whereas in Mohali, there is no water tariff till 5 marla plot. Thereafter, residents are paying Rs 1.80 per KL, which is much less as compared to Panchkula.

Have a look at the statistics

• The tariff in other segments such as industrial, commercial and institutional, has been increased between 150 and 300 percent.

• As per the new tariff, there will be a flat rate of Rs 15 per kl against the existing Rs 4 per kl in the industrial and commercial segment, including SCOs, hotels and restaurants.

• For un-metered connections, mainly in plotted colonies, HUDA will charge Rs 200 for plot sizes up to 100 m, and an additional Rs 200 for every additional 100 m.

• HUDA has also increased the sewerage charges. Flat 25 percent of the water bill is applied to all categories. Earlier, the charges used to be calculated on the basis of the number of toilet seats being used on the premises.

According to a senior HUDA official in Panchkula, the notification regarding the new rates was issued by the Chief Administrator, HUDA. According to him, HUDA was spending around Rs 9 per kl on the water supply to houses and was generating a revenue of around Rs 2-2.5 per kl.

SK Nayar, Chairman, Citizens’ Welfare Association, Panchkula said that there was no need to increase the water charges. He added, “ HUDA has failed to provide water. There is a water crisis all over Panchkula. First, they should provide adequate water and only then the rates should be increased. I demand an immediate rollback of the water tariff hike”. This is what he spoke on the hike.

So what did we conclude?

Panchkula is facing a major water crisis and the residents are already upset about the ongoing water supply system. The sudden increase of the rates will be extremely inconvenient without adequate supply. We hope that HUDA clarifies our doubts by giving equal weight to both the sides as they go hand in hand.