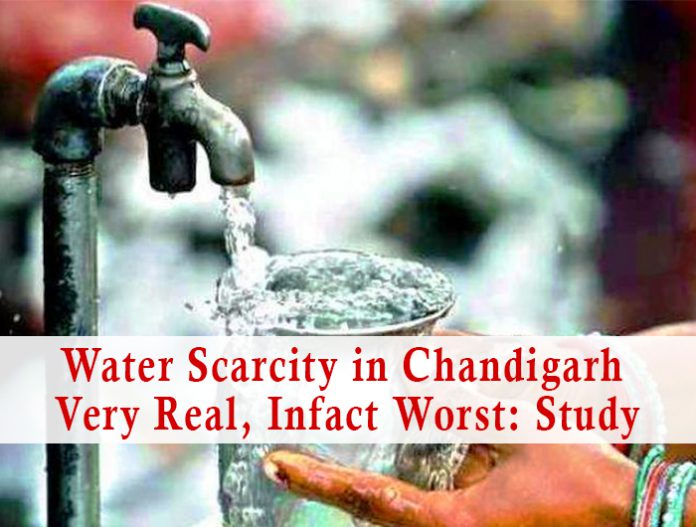 Chandigarh is among 9 Indian states and union territories where “water stress” is “extremely high”, as per a survey by the World Resource Institute. WRI is a US-based think tank advocating sustainability. The study has assessed condition of water scarcity in 17 countries. Shockingly enough, India, which receives maximum rainfall amongst them all, figures at 13th position.

Not just global ranking, the WRI has studied at state level too. The City Beautiful is followed by Haryana, Rajasthan, Uttar Pradesh, Punjab, Gujarat, Uttarakhand, Madhya Pradesh, and Jammu and Kashmir. These states and union territories scored between four and five on a scale of zero to five. Five being the worst.

In Punjab, water table is being depleted. The state is known as the breadbasket of India and farmers are worried.

What is Water Stress?

As per the study, countries with “water stress” means that they are running out of ground and surface water.

Findings of the WRI study

The following are the major findings:

The following have led to acute water scarcity in large parts of the country:

In the survey, Qatar, Israel, and Lebanon are first, second and third, respectively. Pakistan stands on the 14th.

Data from 1960 to 2014 has been accounted for. As per reports, “water stress levels” are calculated by dividing total available water by volume withdrawn.

A total of 87 million gallons of water per day (MGD) is received in Chandigarh.

The following resources make up for this total requirement:

The report’s findings are a wake up call for the administration and citizens. It’s high time we mend our ways of carelessly wasting water and practice water conservation. With monsoons going on, water harvesting must be the top priority of each one of us.