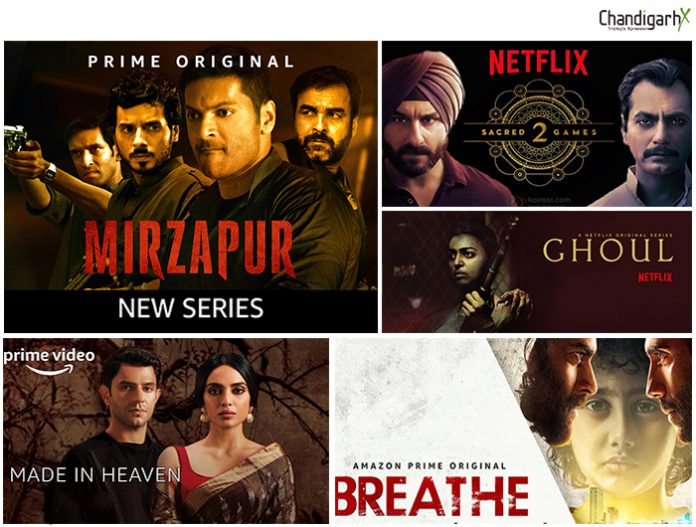 Entertainment is going digital, especially for the Gen Y. This age group craves for bold and intriguing content. Also, this is missing from our television screens right now. Appointment viewing as a concept is passé. We are glad that Indian production houses are finally appreciating the digital expanse the way it deserves. Sacred Games, Mirzapur and Breathe were game changers among Indian web series’.

Here are five upcoming shows. You just cannot miss them.

What it’s about: As much a social commentary as it is a behind-the-scenes look at the glitz and glam of a desi wedding. A lot of complexities and compulsions go into the making of the big fat Indian wedding! For some, a day to honour love. For some, a meeting of two minds and two families. For some, a carnival and a showy display for wealth. The merry- and sometimes murky- world of Indian weddings comes alive in Made in Heaven.

Considering the success of this, we can’t imagine the show’s creators will turn down the opportunity of giving fans a second season.

What it’s about: While most of its original characters are already dead in the first season, the show will bring forward the story of Sartaj Singh’s (Saif Ali Khan) persistent efforts to save the city. The series is based on Vikram Chandra’s novel of the same name. Nawazuddin Siddiqui as Ganesh Gaitonde and Pankaj Tripathi as Guruji too will return to their roles.

Definitely the most popular Indian web series yet, fans are eagerly looking forward to the second season of Sacred Games.

What it’s about: Starring powerhouse performers like Pankaj Tripathi, Ali Fazal, Vikrant Massey and Divyendu Sharma in pivotal roles, the show is about the ceaseless criminal activities engulfing the small town of Mirzapur, Uttar Pradesh.

This interesting story of mafia dons, drugs and guns is all set to return with its second season this year.

What it’s about: The second season will tell a new story and will not be a continuation of the first.

The first season revolved around Danny Mascarenhas (R Madhavan), a football coach. His son is diagnosed with congenital lung disease and he can survive only for five months without an organ donation. Danny steals the organs donors list. Then he does the unimaginable by going on a killing spree to save his son’s life.

Making his foray into the digital space with season 2 will be none other than Abhishek Bachchan. He will be joining Amit Sadh who played a cop in the first season. We are sure this will be one gripping tale, just like the first part.

What it’s about: Ghoul is an Indian horror web television miniseries based on the Arab folklore monster ghoul. The story is set in India in a dystopian future where fascism is at its top. The story’s main plot is the interrogation of a dreaded terrorist Ali Saeed in a secret government internment camp. Radhika Apte played the main character Nida Rahim supported by Manav Kaul, Ratnabali Bhattacharjee, S. M. Zaheer, Mahesh Balraj, Rohit Pathak and Mallhar Goenka in prominent roles.

The Season 2 of the show is most likely to premiere in 2019.

Nothing is as good as Game of Thrones, but these shows are pretty close. The world’s weekly dose of medieval fantasy drama has come to an end. Chances are that fans are stretching that finale adrenaline to live in the Thronies bubble forever. It’s hard to believe it’s all over, and after eight seasons, GoT fans will need a new series to binge to fill the void of the ending of the series.