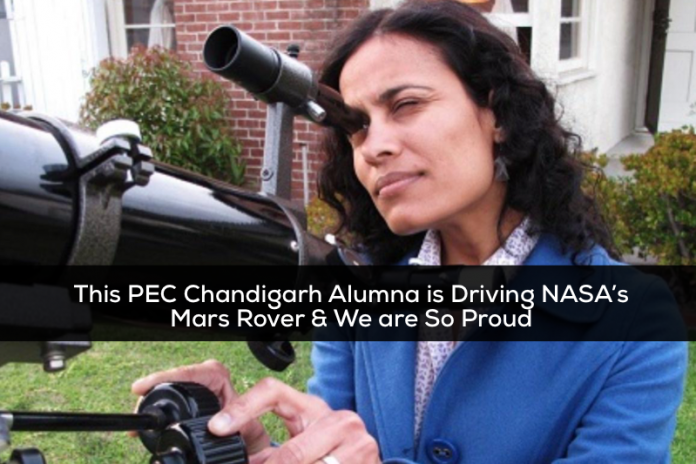 What’s making us proud is that Vandana aka Vandi not just that she was born in Halwara (in Punjab) but also she did her electrical engineering from Punjab Engineering College, Chandigarh! She is a daughter of Indian Air Force officer.

Later she moved to the USA to do her PhD in robotics from Carnegie Mellon in 2005. Hereafter, there was no stopping. In 2006, she became one of the co-writers of PLEXIL, the software programming language extensively used in NASA’s automation projects such as K10 rover, Mars Curiosity, International Space Station, Deep Space Habitat and Habitat Demonstration Unit, Edison Demonstration of Smallsat Networks, LADEE and Autonomy Operating System (AOS). The following year she joined the prestigious NASA’s Jet Propulsion Laboratory (JPL) with a special interest in robotics and flight software and became part of the Mars rover team in 2008.

Her child-like excitement for her profession is clear when she said,”When Mars is visible in the sky, you look at that little dot and you think right now there’s a robot out there doing commands that I told it to do. That’s pretty wild.” Her passion for space has been fuelled by her childhood love for the TV series Star Trek. “I really think I have one of the coolest jobs in the world,” she proudly said.

She has been driving rovers on Mars surface since 2008. She strongly believe that the latest Mars mission would help answer questions “that change what we know about our place in the universe”.

And Vandi Verma, the roboticist, is not just an icon for all ambitious girls and women but mothers too. She is a mother of one-year-old twins – a boy and a girl, that hasn’t held her back from living her dreams! She simply puts “Don’t make assumptions about what a child may be interested in because of their gender or race,” she said. “Don’t buy the Lego just for the boy.”