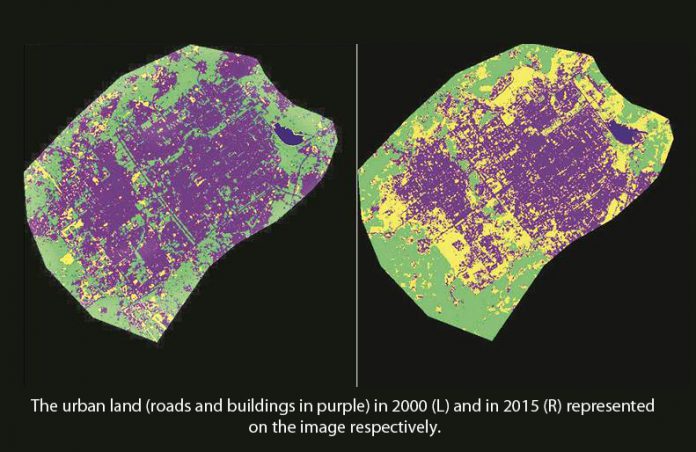 The recent research study by a fourth year BE (Civil Engineering) student at Punjab Engineering College, Vanshaj Verma, highlights the extent of urbanization Chandigarh has gone through since the year 2000.

According to his study, the open land area in Chandigarh is dwindling. From as high as 32% of the total area in the year 2000, the open area now is about 8% now. Even the percentage of roads and buildings has increased more than 50% over the last 15 years.

During this period, the maximum land coverage has been noticed in the southern sectors of 48, 51 and 63 with many housing projects being completed there. The construction of a new ISBT in Sector 43 and new shopping complexes in Industrial Area added to the sprawling urbanisation.

Vanshaj Verma did his research through a study of remote sensing satellite images. He compared four satellite images of Chandigarh, taken in 2000, 2005, 2010 and 2015 and used a software especially trained to differentiate between various geographical aspects.

The research was guided by PEC civil engineer Professor Amrit Singh Sandhu who also shared his concern about increasing encroachments in the city.

WHAT THE EXPERTS SAY

The experts debunk the alarmist view and feel everything is going as planned.  Former chief architect of Chandigarh Sumit Kaur says, “There is no threat. There is a Master Plan for the city till 2031, so there will be no problem of electricity and water in the city.”

She points out that the administration is already approving only green building projects, and has made it mandatory for solar panels to be fitted on all houses and building rooftops, occupying plots larger than 500 yards.