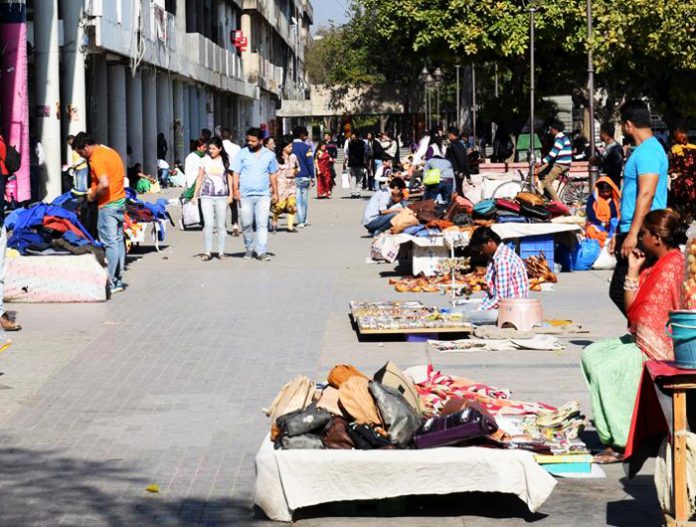 The once known crown of City Beautiful, Sector 17 has now become a flea market. The UT Administration is responsible for the vendors’ menace here. Le Corbusier, the French architect, may never have imagined this sight of the city’s heart.

In an intriguing article titled, ‘Explained: How Chandigarh’s Sector 17 Plaza turned into a flea market’ in The Indian Express, Hina Rohtaki talks about this change. The authorities are unable to keep a check and show their helplessness in this regard.

Before 2016 when the street vendors’ survey was conducted, this was not the position. As per the Municipal Corporation, no vendor was to be dislocated until the study was completed. In the process, new vendors mushroomed in every nook and cranny, including the Sector 17 plaza and even the busy sectors.

A place once known for its open spaces, in the present situation, houses about 300 vendors spread across the plaza. They have encroached upon every little space. From fashion wear products like clutches, belts, earrings, footwear to even food items, they are selling all kinds of stuff.

What do the vendors say?

According to the vendors, they have been in the area for many years. Thus, they should not be dislocated.

What was the aim behind the street vendors’ survey?

To know the exact number of vendors, this study was conducted. Subsequently, licenses were to be given. However, those who were not seen earlier could also now be seen at the Plaza, Sector 17.

In 2012, the enforcement limited the number of legal vendors to 7,500. But the survey stated that 22,214 vendors were to get legal status in Chandigarh. Questions were raised on these findings too.

Where does the Administration fail?

There has been criticism from store owners and visitors on the vendors’ menace, but the Estate Office officials have shown their helplessness. Vendors have taken a stay from the Punjab and Haryana High Court. Ram Milan Gaur, President, Street Vendors Association, said that it would be unfair on the part of Administration. The authorities cannot dislocate them until they do not give licenses.

What is the reaction from store owners?

In January 2017, store owners of Sector 17 moved to the Punjab and Haryana High Court seeking directions to the Administration and Municipal Corporation for removal of these vendors. The complaint was filed by four shopkeepers. In their plea, they stated that they were suffering acute hardships in terms of revenue. Even with different by-laws and notifications in the legal books, vendors had been allowed to sell petty items. Moreover, pedestrians including tourists find it difficult to walk around in the shopping complex.

How has the process been delayed?

In its 2016-17 report, the Controller and Auditor General (CAG) pointed out that the Administration had failed to frame a scheme under the Street Vendors Act. Six months time period was given for this.

The report specified, “For protection of livelihood and regulation of street vending, the Government of India published the Street Vendors Act 2014. As per Chapter X, the appropriate government shall within one year from the date of commencement of the Act by notification make rules for carrying out provisions of the Act. Also, the appropriate government shall frame a scheme within six months from date of commencement of this Act after due consultation with local authority and town vending committees.” It further stated, “In this regard, it was noticed that Street Vendors Act, UT Chandigarh, had been notified on July 27, 2015, but Chandigarh administration could not frame a scheme in this regard as per the said time limit given in the act.”

Now, a single bench has been assigned to hear the cases filed by both ends. The date of the hearing is scheduled for October 17.