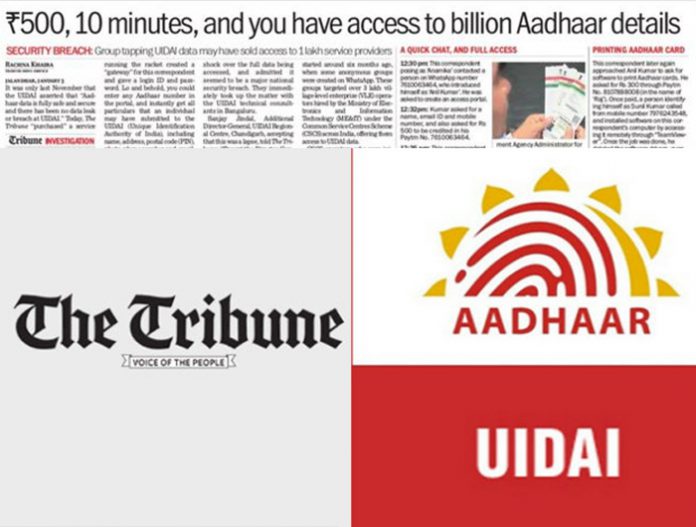 The pot-boiling drama over the UIDAI-Tribune row is intensifying with every passing day. Multiple protests have been launched against the UIDAI for filing an FIR against The Tribune’s reporter, Rachna Khaira, over the Aadhaar data breach investigative story.

The Tribune’s Chief of Bureau (Punjab), Kuljit Bains, said that the investigation was carried out responsibly in public interest by the newspaper.

What had Happened Earlier

Jan. 4, The Tribune had come up with an investigative story “Rs 500, 10 minutes, and you have access to billion Aadhaar details”. The sensation that followed led to a nationwide furore, with criticism raining on UIDAI from all corners.

Jan. 7, An FIR is filed by Deputy Director of UIDAI against The Tribune, reporter Rachna Khaira, Anil Kumar, Sunil Kumar and Raj.

A memorandum seeking the withdrawal of the FIR against the charged, was submitted to Governor VP Singh Badnore.

Meanwhile, Tribune is receiving support from many press clubs and farmers unions. These bodies have demanded that action should be taken against the Unique Identification Authority of India (UIDAI) officials who had failed to protect private data and were using legal manipulations to muzzle the investigative report.

Journalists in Jalandhar took out a march from Punjab Press Club to Deputy Commissioner’s office, where a memorandum addressed to PM Narendra Modi was submitted.