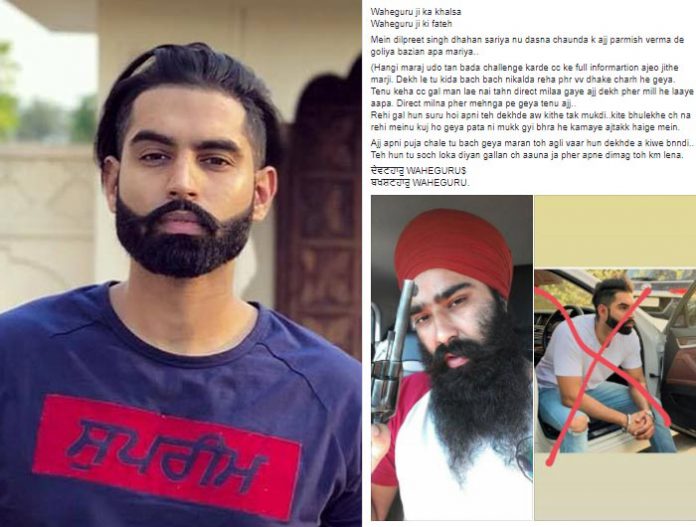 Punjbai music lovers woke up to a distressing news Saturday morning that recent Punjabi singing sensation Parmish Verma has been shot at near his house in Mohali on Saturday at around 12.30 am. He along with his friend, Kulwant Singh Chahal, were returning from an event in Chandigarh when they both were shot at.

They were immediately rushed to Fortis Hospital in Mohali and by evening hospital issued a statement that both of them were out of danger. Both of them had sustained a bullet injury in their legs.

Parmish was driving his black Toyota Fortuner to his house in Savitry Towers, Sector 91, Mohali, and his friend, Kulwant, was seated beside him. According to police, a white Hyundai Creta had been following them from Elante Mall. Just before the incident, Parmish had dropped his two bouncers. The Creta intercepted Parmish’s car at the entrance of Sector 74. A man alighted and fired six bullets.

Gangster took to facebook to claim responsibility; but police is cautious

While police is still searching for the motive behind the attack, two Punjab gangsters had claimed responsibility.

“These claims could be to mislead the investigation but the involvement of gangsters cannot be ruled out,” said Senior Superintendent of Police, Kuldeep Singh Chahal.

It is reported that police officers privy to the investigation said that Dilpreet had been making extortion calls to Parmish.

Parmish Verma had shot to fame with its chartbuster ‘Gaal ni Kadni‘ song that has over 118 million views on Youtube. His latest song ‘Shaad‘ has earned 27 million views in just three weeks of its release.