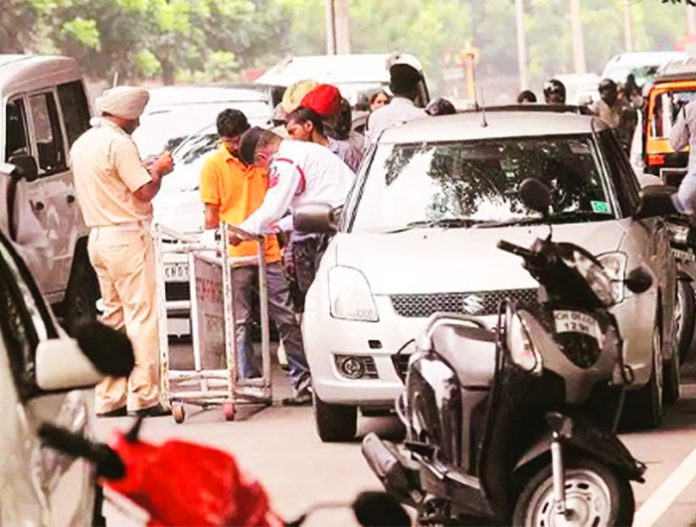 Chandigarh administration is planning to implement the Telangana model that has strict provisions for various traffic offences. In case if the violation list touches a cutoff point, the motorist is expected to lose the driving license. This is being planned under a ‘scheme for penalty points’.

What is the Penalty Point Rule?

In its order in 2017, the Telangana government said that if the cumulative tally of penalty points accrued exceeds the limit of 12 during the preceding period of 24 months, the driver’s license shall be suspended for one year. Cancellation will be accounted for from the date of accrual of 12 points. This score shall cease to subsist once suspension of the driving license.

The Penalty Point Rule is explained as follows:

As per this rule, penalty points are fixed for various offences in the range of one to five.

When a motorist’s violation score reaches twelve, his/her driving license is cancelled for a year. Upon subsequent violations, it will be suspended for three years.

If the tally reaches five penalty points in case of a learner’s license, it will stand cancelled.

The Telangana order said that if a motorist has accumulated several points for violations, he shall get an opportunity to reduce the tally by three penalty points. This is by undergoing a defensive training course or motor vehicle accident prevention course from a recognized institute by the transport department. This provision shall be allowed two times in a continuous period of two years.

Recently, to levy strict measures on drunk driving, the Chandigarh district court imposed a fine of Rs 10,000 each on around 40 traffic violators. This came given the new amendments in the Motor Vehicles Act. Earlier, the fine was Rs 2,000 only.

UT For Suspension Of Licenses

In November 2016, following the Supreme Court panel’s counsel, Chandigarh traffic police have recommended the suspension of more than 4,000 driving licenses. This is in case of four offences, namely speeding, jumping traffic signal, using a mobile phone while driving and drunk driving.

The committee, headed by Justice K S Radhakrishnan directed chief secretaries of all states and UTs to take up stern action against increasing road fatalities. An order was passed disqualifying the offender from holding a driving license for a specified period and also by seeking imprisonment wherever it is provided under the law.

Chandigarh traffic police have already placed this proposal. The issue is yet to be discussed during the Road Safety Council meeting on August 30. As per a senior UT official, once approval is sought after, they would work on the already existing model. Changes will be made if required. Thereafter, the UT transport department would have to maintain a database for record offences.