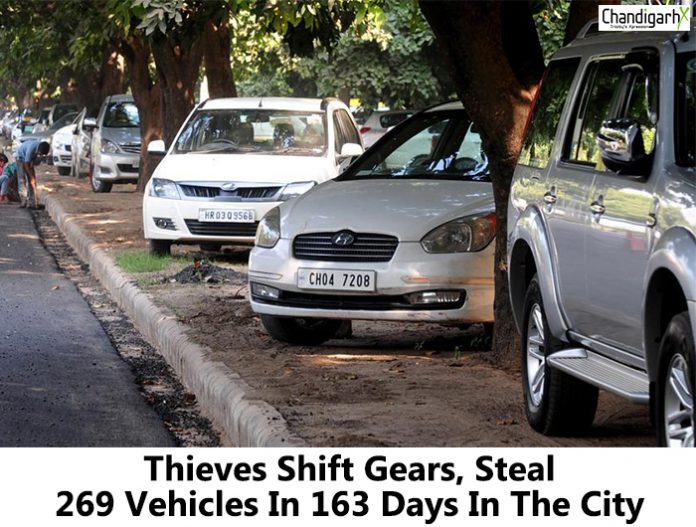 Every two days, three vehicles are stolen from the city. That is the strike rate of thieves, succeeding in driving away 269 vehicles in 163 days (till June 13) from the city this year. Their favourite haunts- sectors 34, 36 and 39 and Manimajra- areas that are near Mohali in Punjab and Panchkula in Haryana. If the police are to be believed, drug addicts are behind most of the auto thefts. They steal vehicles to commit snatchings to fulfill their habit, police said.

During daytime, most of the vehicles were stolen from free parking lots of markets, hospitals and public buildings. At night, the thieves targeted vehicles outside houses. Out of the stolen vehicles, 217 were two-wheelers, 44 cars and the rest three-wheelers.

According To The Police

Strictness on the part of the police has prevented the accused from selling stolen vehicles in nearby states like Uttar Pradesh, Delhi, Punjab and Haryana. “Mostly, the buyers are scrap dealers. They dismantle the vehicle and sell the parts,” cops said. Nonetheless, police has recovered 81 stolen vehicles and arrested 59 auto lifters from different parts of the city so far.

Under this, suspected persons or vehicles are checked, especially during odd hours. Police with maximum force randomly seal particular sectors to rule out any chance of illegal acts. They have also been taking unlocked vehicles into their possession. They are being released after proper verification. Essentially, cops regularly observe those released from jail and former auto lifters through beat staff, the DSP said.

We urge all drivers to take extra time to park safely in designated parking lots and lock your vehicle carefully. If you value your vehicle it pays to be picky about where you park it.