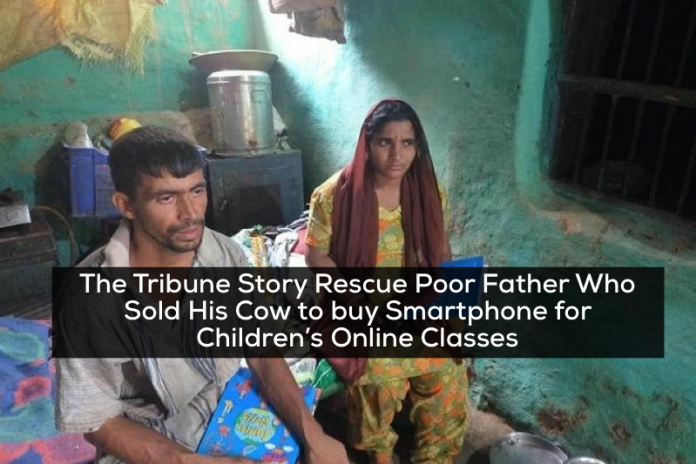 Journalism is not just about specifying and analyzing data. It’s not about being mouth-piece of the leaders, administrations, governments but being the medium between government and the masses. And above all, giving voice to the weaker and underprevileged sections of society.

These journalism values were held high once again when The Tribune journalist Ravinder Sood’s story of ‘Man sells cow to buy smartphone for online studies of his children’ was published and shared on social media handles of The Tribune.

The Story
A poor man, Kuldip Kumar of Gummer village in Jwalamukhi (Himachal Pradesh), had to sell his cow to arrange Rs 6000 needed to buy smartphone to continue online studies for his children. He moved from pillar to post to get loan from banks, money lenders but none came forward to help him seeing his poor financial status. He lives in mud house with his family and herd of cows. Neither he holds BPL card nor is he beneficiary of government schemes for poor, though he has applied for inclusion of his name in IRDP, BPL, Antodaya but all in vain.

Left with no choice, he sold off his cow to buy smartphone for his children’s education.

Within hours of publishing this story, there were queries about him and his whereabouts at the newspaper office in Chandigarh and social media handles. Various news channels, journalists like Amit Barua, Barkha Dutt called for his details. Barua was the first one to transfer Rs 10,000 to his account. Sonu Sood also transferred money to his account. More help poured in and some even pledged to provide monthly financial assistance for education of his children.

The Governor has sought a status report from the Kangra administration on Kuldip’s condition.

Deputy Commissioner Rakesh Prajapati directed the Jwalamukhi administration to expedite his case, his name to be added in BPL list so that funds could be provided to him for the construction of a house under the PM Awas Yojana.

Though it is heartful to see benevolence for the poor but sad part is this only came when his plight hit the headlines.

What about those whose painful stories and cries for help are still unknown and unheard?