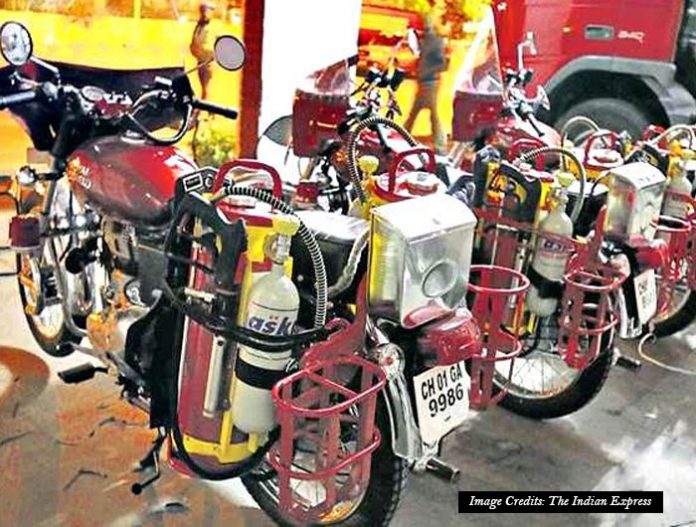 The Firefighters in Chandigarh have upgraded their ride. What is it going to be? It’s none other than the fierce and growling Bullet that has been chosen.

Fire fighting vehicles usually are caught up in traffic. It takes additional time to reach the precise location. Moreover, the trucks have to pass through narrow lanes and congested areas. So red bullets have been selected as the preferred mode of transportation.

7 Bullet motorcycles have been added to the stable of the firefighting department. The total cost of the bikes is Rs 7.77 lakh.

What Paraphernalia Will Be Attached To The Motorcycles

The bullets will be modified and equipped with advanced fire control equipment- worth 45 lakh rupees.

These flag off for these fire fighting bikes will be after fifteen days as said by the Additional Commissioner Uma Shankar Gupta. The firefighting equipment will be installed by this time.

These fire tending bikes will be highly useful in congested areas like sectors 22, Manimajra and other internal areas. Due to encroachment, there is a lack of space in these areas.

Only Helpful For Small Fires

These bikes will be helpful only in dousing small blaze.  Water released range is upto 10 metres. It will not be useful in case of an inferno.

This decision has been taken in the wake of the 2015 conflagration at Shantinagar in Manimajra. The officers had proposed for the bikes after this incident.