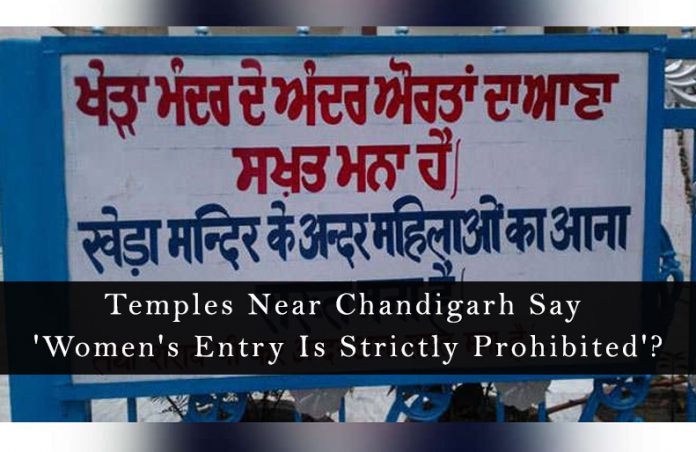 Chandigarh- the city beautiful boasts being the epitome of urbanism and progress not just in the country but whole world, however what happens in its vicinity brings nothing but shame and embarrassment only.

Dhakoli in Zirakpur, Nayagaon and Kansal village near Chandigarh, all these places are the disgraceful examples of conservative, male chauvinistic and fanatic mindset. Women here are considered ‘dirty’, ‘impure’ and believed to bring ‘misfortune’ and barred entry from the temples here.

And the most disgusting part is the temples have shamelessly and remorselessly installed sign board on the temple barring women to enter. 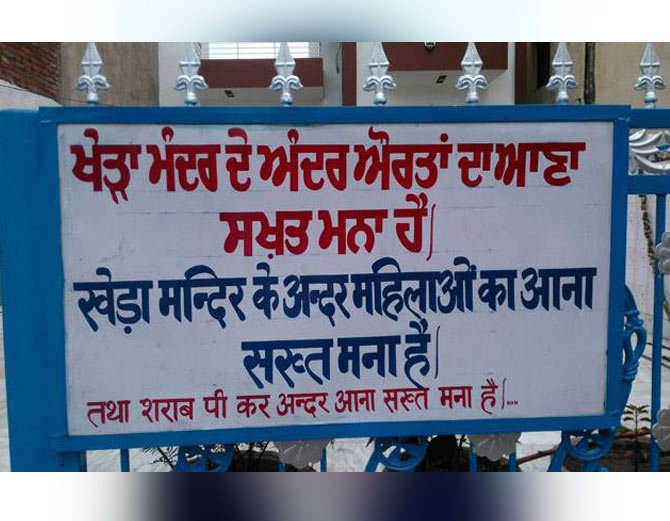 At Kansal village, this diktat was pronounced by the temple management committee a month ago on the advise of a priest after few locals approached him with a concern of untimely death of 3-4 youths in the village. The priest said that the Kheda, a local god is not happy with them as the women do not respect him.

“The god became furious as the women did not wear a veil while entering the village as a mark of respect. Some even entered the temple during their periods. Women while having periods are ‘impure’ and ‘dirty’ ,” said Sanju Kansal, a local.

Others including a village headman, Shamsher Singh agreed with Kansal and said that the decision was unanimous as it was in the interest of the village. “The whole village nodded in favour of this decision as it was the question of the well being of the future generation. The baba had advised us not to allow women inside the temple for 40 days. The women too have agreed to this,” says Shamsher Singh.

The most shocking thing is women have agreed to this diktat silently. One woman localite says, “It hardly matters who goes or not. I pay obeisance from outside.”

There are only a few strong voices who find this ban arbitrary.

While the women of Kansal village are silent on the diktat, women’s rights activists are up in arms against the ban.

“I am shocked how the people who live in the vicinity of country’s modern and highly educated city Chandigarh stooped so low and labeled women as inferior human being. This is shameful and against the women. We will start agitation if the board is not removed immediately ,” says Renu Mathur, a Panchkula based women’s rights activist.