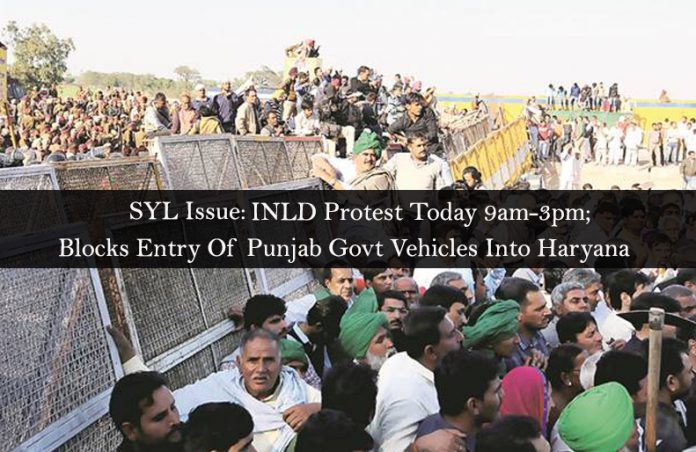 Politics galore and brings the discomfort to the common citizens.

July 10- the designated date by the Haryana opposition party Indian National Lok Dal (INLD) to protest on SYL canal row, the common people have to postpone their traveling. Though the leaders have clearly specified theat ‘no Punjab government bus will be allowed to pass through Haryana’, along with PRTC, people are rethinking their plans to travel through the state, fearing any ugly situation.

Haryana’s main opposition INLD will hold protests at many points from 9 am to 3 pm on Monday, including Lalru-Chandigarh Road, Ambala-Shambhu border, Narwana- Dhanauri, Ratia-Budlahada Road (Jakhal point) in Fathehabad district and Dabwali on Haryana-Punjab border.

ALTERNATIVE ROUTES SET BY THE POLICE

Punjab Police Patiala Range IG, AS Rai said traffic would be diverted to routes including Ghanaur-Pehowa and Panchkula-Nada Sahib.

SECTION 144 TO BE IMPOSED

As a precautionary measure, both state governments have decided to impose section 144 of the CrPC against unlawful assembly in the border districts. Haryana has already demanded 10 companies of paramilitary forces from the Centre. Punjab police officials reviewed security arrangements around Punjab-Haryana border.

Police fear that radicals may take advantage of the situation and converge over the emotive issue of sharing water with Haryana.

Pertinently, Haryana’s main opposition party INLD had announced that its activists will stop vehicles from Punjab at the Shambhu barrier near Ambala. Private vehicles would not be stopped during the day-long protest, but INLD has threatened to stop all government vehicles, politicians, and other official vehicles. Punjab has worked out diversion of traffic to avoid any stand-off and decided not to operate any government buses on July 10 through Haryana.

The INLD had taken hundreds of activists towards Shambhu, 10 km from Ambala, on the NH-1 in February, saying it will start digging the canal in Punjab.

REASON OF THE PROTEST- SYL Issue

Let’s take a look at the timeline of the problem:

1966: Punjab divided and a separate state, Haryana was formed.

From the beginning, the water-sharing issue had been the bone of contention between the two states.

March 1976: Even as Punjab continued to protest, the central government issued notification allocating water to Haryana from Punjab.

To enable Haryana to use its share of the waters of the Sutlej and its tributary Beas, a canal linking the Sutlej with the Yamuna, cutting across the state, was planned.

April 8, 1982: Prime Minister Indira Gandhi, ceremonially dug the ground at Kapoori village in Patiala district for the construction of the 214-km Sutlej-Yamuna Link (or SYL) canal, 122 km of which was to be in Punjab, and 92 km in Haryana.

1983: Indira Gandhi had negotiated a tripartite agreement between Punjab (where Darbara Singh of the Congress was Chief Minister), Haryana (where Bhajan Lal, who had defected to the Congress from the Janata Party with a number of MLAs, was CM), and Rajasthan (where again the Congress was in power, with Shiv Charan Mathur as CM).

As per the calculations of available supplies of the Beas and Ravi, Punjab, Haryana and Rajasthan were allocated 4.22 MAF, 3.5 MAF and 8.6 MAF respectively. Jammu and Kashmir and Delhi got 0.65 MAF and 0.20 MAF.

The Akali Dal, which was opposed to the agreement, started an agitation known as Kapoori Morcha to oppose the construction of the SYL canal.

According to this, a tribunal would verify the claims of both Punjab and Haryana on river waters — following which the Akali Dal agreed to withdraw the agitation.

1987: The Eradi tribunal headed by Supreme Court Justice V Balakrishna Eradi in 1987 recommended an increase in the shares of Punjab and Haryana to 5 MAF and 3.83 MAF respectively, while taking into account utilisable supplies of surplus water at base stations.

The tribunal’s decision, however, could not be notified.

Punjab became embroiled in militancy. Many Akali leaders were opposed to the deal. Longowal was assassinated in less than a month of signing the accord. In 1985, after Punjab emerged from nearly two years of President’s Rule and Surjit Singh Barnala became Chief Minister, work began on building the canal. But the opposition never died, and in subsequent years, even as some 90 per cent of the work was completed, kept exploding periodically in violent incidents. In 1990, a chief engineer and his assistant were killed by militants apparently to protest the construction; 30 labourers working at a project site near Chandigarh had been killed earlier. As the turmoil escalated, Punjab stopped work.

1990: Haryana took up the matter with Delhi, and asked that the work be taken over by a central agency.

1996: After failing to make headway, it moved the Supreme Court in 1996, seeking directions to Punjab to complete the work on the SYL.

2002 and June 2004: The supreme court directed Punjab to complete the work in its territory.

July 2004: Within a month of the Supreme Court order, on July 12, 2004, the Punjab Assembly passed The Punjab Termination of Agreements Act, 2004, terminating its water-sharing agreements, and thus jeopardising the construction of SYL in Punjab.

2016: Supreme Court started hearings into a presidential reference to decide on the legality of the Punjab Termination of Agreements Act, 2004.

The Solicitor General, appearing on behalf of the Centre, took a pro-Haryana stance, saying the Centre stood by the SC’s orders asking Punjab to complete the work on SYL in its territory.

The development has triggered a political storm in Punjab.

Punjab Pradesh Congress Committee (PPCC) chief Capt Amarinder Singh — who was Chief Minister when the 2004 Act was passed — launched a blistering attack on the ruling Shiromani Akali Dal and BJP, and announced a march to protect Punjab’s waters. The Congress moved an adjournment motion in the Assembly on the issue, but the Akali Dal pre-empted the move, with Chief Minister Parkash Singh Badal moving a resolution against sharing any water, and the attempts to force Punjab to build the SYL canal.

July 6, 2017: The Supreme Court passed its verdict regarding the controversy saying that Punjab state government’s law to terminate a water sharing agreement with other states as unconstitutional.