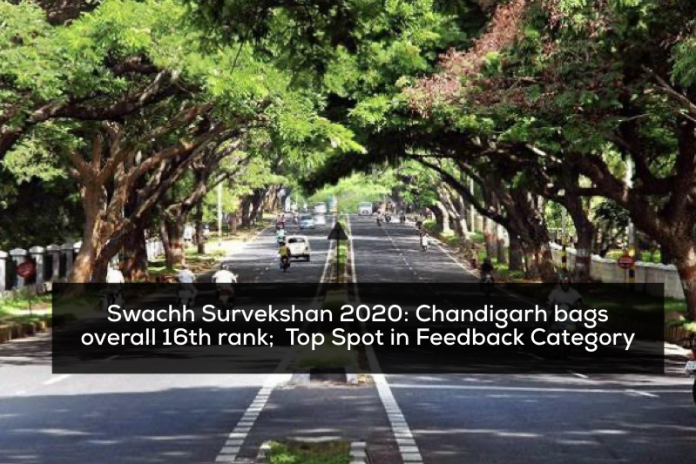 The Swachh Survekshan Awards 2020 have beenn announced by Union Housing and Urban Affairs Minister Hardeep Singh Puri and Chandigarh has reasons to cheer and introspect both.

While Chandigarh got the highest score in the citizen feedback category (indicating that citizens are convinced with MC’s working), on the other hand, this year the city has ranked 16, four notches better than last year’s 20th rank. In the first edition of the survey in 2016, Chandigarh had secured top spot.

Maximum in some areas

The city beautiful scored maximum marks in some areas like cleanliness of residential & commercial areas.

Need to focus on waste segregation

Chandigarh got a 3 star rating in Garbage Free Cities (GFC). It needs to focus on garbage processing to improve the rankings.

Besides these, much needs to be done on wet & dry waste segregation where the city got a low score.

Panchkula, securing 56th position, has shown an improvement of 15 positions from the last year’s 71st spot. The city scored 3,783.01 marks out of 6,000. In Haryana, it ranks 3rd after Karnal and Rohtak.
Mohali slipped four notches from previous year’s ranking to 157. It even fares low amongst 14 cities surveyed in Punjab and has secured 7th position.

The survey was launched in 2016 with an objective of large scale participation and promoting a healthy competition among cities towards becoming India’s cleanest cities.

It is the world’s largest cleanliness survey, which covered a total of 4,242 cities, 62 Cantonment Boards & 92 Ganga Towns & saw participation of 1.87 crore citizens.Besides this, it monitors the performance of Swachh Bharat Abhiyan.

Cities are tested on various parameters such as sanitation, cleanliness, waste management, etc.