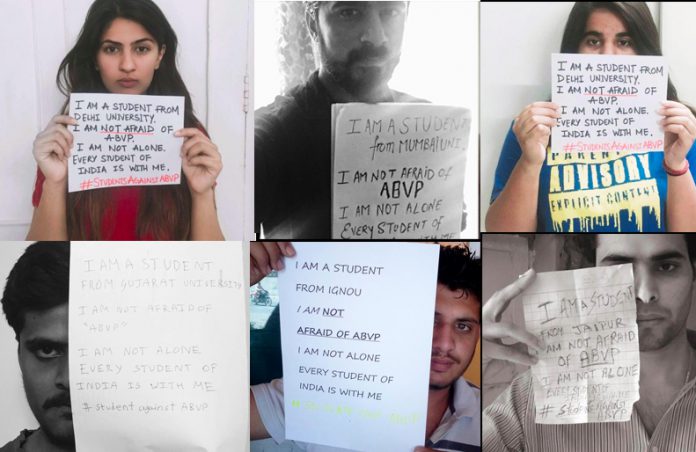 What started as a fest bringing together littérateur across the spectrum of age and genres ended in nefarious violence in Delhi University’s Ramjas College.

The social media in India is witnessing students giving vent to their anger in the form of a campaign with hashtag #StudentsAgainstABVP. Young students are changing their profile pictures with a paper saying ‘I am not afraid of ABVP. I’m not alone. Every Student of India is with me.’

What led to this Online Activism?

The literary event in Ramjas College had invited JNU student Umar Khalid and Shehla Rashid as speakers. The protesters from ABVP gathered outside the college to protest the participation of the two. They entered the arena and  called Mr. Khalid an ‘anti-national’, for his outspoken views against the Sangh and incumbent Modi Government. ABVP’s heavy-handed action resulted in the cancellation of the literary event and led to a chain of protests against the distruption (by students and teachers) and counter action (by ABVP). The innocent students and teachers were brutally roughed up by the mob, stone-pelted and lathi-charged by police in its efforts to control the clash.

What this violence led to?

The unfortunate incident has led to nation-wide students joining in online activism led by known student activist, Gurmehar Kaur, initiating a profile picture campaign on Facebook, Twitter and Instagram, asking students across India to unite and condemn the violent methods employed by ABVP. 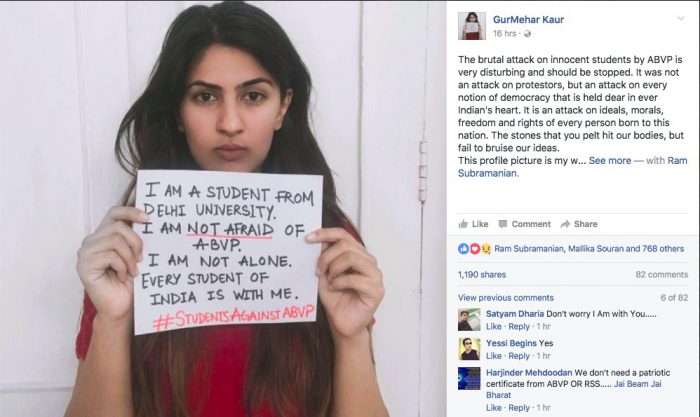 Students want the violent ways of ABVP (and every other group) to end and Gurmehar Kaur’s profile picture campaign is resonating with them and uniting them online to speak up against ABVP’s on-ground actions.

Some students from many universities across India like Mumbai, Rajasthan, Gujarat have already voiced their support to this online protest by changing their profile pictures. In the days to come, many more universities are also expected to follow suit.