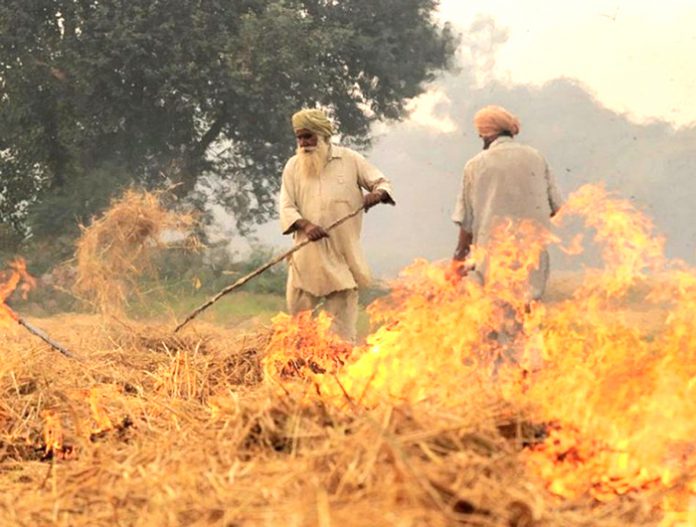 Farm fires worsened the air quality on Monday in The City Beautiful to one of the lowest levels in recent months, recording more than the day of Dussehra celebrations. The air quality index (AQI) at 160 at 7 PM was much higher than on October 1. AQI was recorded at 58 during the same time then.

What were the findings on Dussehra?

What is the reason?

As per T C Nautiyal, member secretary, Chandigarh Pollution Control Committee (CPCC), yesterday’s polluted air was only due to stubble burning cases in Punjab and Haryana.

What were the Punjab government’s findings?

As per Punjab Remote Sensing Centre, Ludhiana, 136 incidents of stubble burning were established on Monday.

959 cases of stubble burning were revealed from September 23 to October 14 divided among the following districts:

In a recent survey published in Science of the Total Environment found Amritsar to be the worst effected. The district recorded high levels of particulate matter – PM10 and PM2.5 – black carbon, gaseous pollutants, oxides of nitrogen and sulphur dioxide.

According to Kahan Singh Pannu, Secretary, State Agriculture Department, the sudden spike is due to advancing of paddy sowing by a week. He claimed that the final figures would be less.

Last year, 495 cases were recorded during the same period. In Punjab, the 30 lakh hectares under paddy cultivation gives rise to a whopping 200 lakh tonnes of straw. Most of this is set on fire.

Has the Punjab government put in efforts in this regard?

The state government’s ban on stubble burning under Section 19 (5) of the Air (Prevention of Pollution and Control) Act, 1981 seems to be having little impact. District magistrates have also banned this practice under Section 144 of CrPC. Also, evoking Guru Nanak Dev’s ideology and his persuasion to save the environment has drawn out minimal interest. There is no abatement in the burning of paddy remanence in Punjab.

What measures did the government adopt?

In the past year, the government has taken the following steps to warn off farmers:

What are the farmers saying?

As per Sukhdev Singh Kokri, General Secretary, Bhartiya Kisan Union (Ekta Ugrahan), farmers are worst affected. By setting fields on fire, their health is at risk. But they have to do it because there is no other choice.

Kokri added that their union had offered three suggestions to the government, namely:

On the other hand, government has not even discussed regarding the suggestions, leave alone the implementation.

Does the Chandigarh administration have appropriate data?

No, currently, Chandigarh does not have any data to quantify the proportion of various elements to the overall level of pollution. Thus, lately, the city’s administration decided to conduct a source appointment study in this regard.

What do the experts say?

Experts fear that the trend is set to continue until commercial benefits are administered towards labourers. According to Jagir Singh Sharma from Centre for Research in Rural and Industrial Development (CRRID), Chandigarh, there are profitable choices to stubble burning as well. Incentivising the producers will only prove efficacious.