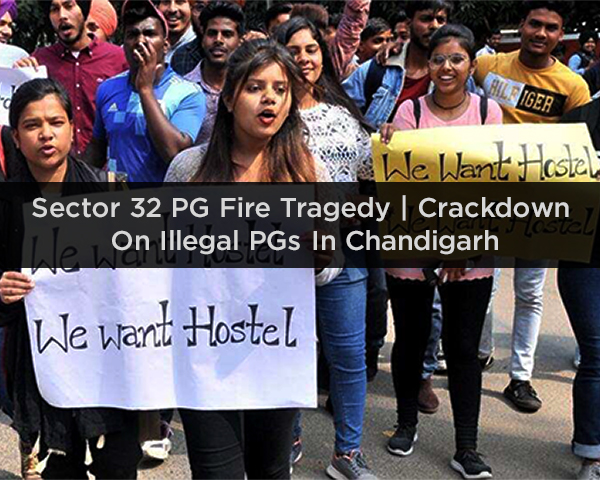 Three girls were charred to death and two were injured in a tragic incident in Sector-32 based illegal paying guest (PG) accommodation. In the wake of the incident, the Chandigarh administration finally looked up and took note of the violations being committed by PG business owners. The kind of PGs that have been constructed inside is giving an open invitation to any tragedy.

A Tribune correspondent, posing as a student, set out for Chandigarh’s PG accommodations. She was amazed to find that out of five, two of them had shut their operations.

This PG is situated on the first floor of the two-storey building. One room housed four occupants. There were three entrances to the building. But, the PGs had access only from one of them.

Towards the extreme right, a narrow staircase led to the first floor. Each room had a partition made of plastic, wood and metal panels along with an attached sliding door.

There were two single beds, a small cupboard along with the window on one half. But, there was no ventilation. The other half of the room had no washroom, exit or window. With no space left for walking, this seemed an easy trap in case of any tragedy.

As a result, groups of students had been kicked from their PGs. Some had gone back home and some PG home-operators had booked rooms for students in hotels until the storm would pass. Students, on the condition of anonymity, said that PGs must be made as per building bylaws. As it is rightly said, prevention is better than cure, installing fire alarms or extinguishers, would prevent such disasters.

Asking where they are supposed to go if the PGs are shut down, students of Post Graduate Government College (PGGC), Sector 46, staged a protest. They alleged against the college authorities to provide its students with a hostel facility.

Deputy Commissioner Mandip Brar directed an Assistant Estate Officer (AEO) to keep a check on smooth facilitation for registration of PG accommodations, which fulfill the required norms. The inspection drive will continue in the coming days, he said.

The UT received 29 complaints against illegal PGs, including twelve from south division, seven from the centre and ten from east division. Yesterday, the UT estate office got 17 complaints on its helpline.

City residents can report about illegal PGs in their locality on helpline number ‘1860-1802067’ of the UT estate office. The teams constituted by the SDMs are doing regular checking and around eighty-seven notices have been issued since Monday.

As per reports in The Tribune, 47 more illegal PGs have been operating in the city.

Only 3 Show Up For PG Registration

Meanwhile, a help desk was set up at the reception centre of the estate office. This is to facilitate speedy registration of PGs. The applicants can apply by filling Form A available from 9 am to 5 pm. Shockingly, only three applications have been received.

The administration, meanwhile, has started the process to revise its PG policy.

The UT is planning to include the following: