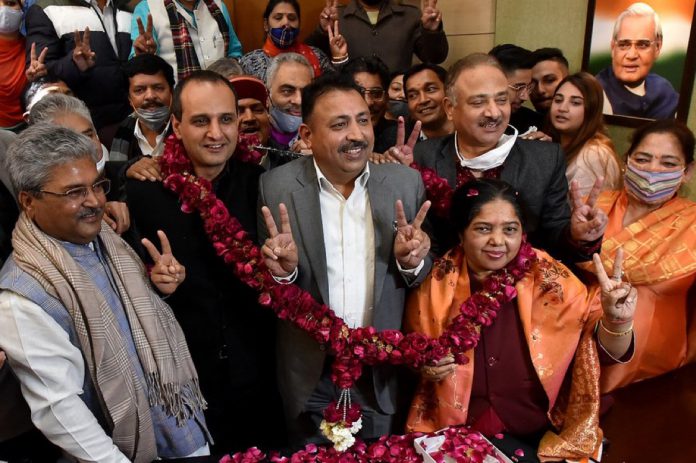 In the recently concluded Chandigarh Municipal Corporation’s Mayoral elections, BJP councillor Ravi Kant Sharma has been as elected as Chandigarh’s new mayor. He got 17 out of 24 votes. While Congress candidate Devendra Babla could manage to get only five votes and two votes were counted as invalid.

Sharma is a first time councillor and before this he was senior deputy mayor. He succeeded BJP’s Raj Bala Malik. Chandigarh MP Kirron Kher and councillor Heera Negi failed to appear in mayor election due to health reasons. The lone Shiromani Akali Dal councillor Hardeep Singh boycotted the election though he was present during voting.

This is the Bharatiya Janata Party’s fifth consecutive term and the last mayoral election of the present municipal corporation House, which goes to the polls by the end of this year. Other than him BJP’s Maheshinder Singh Sidhu and Farmila were elected senior deputy mayor and deputy mayor, respectively. Both got all 19 votes of the members present in the House.

After Sharma was elected mayor, the Congress councillors boycotted the elections of the senior deputy mayor and deputy mayor.