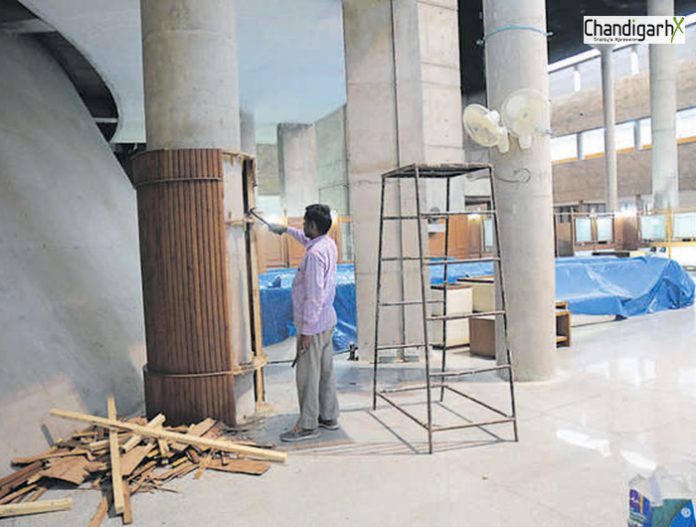 The entire state machinery and members of the Legislative Assembly are busy in Lok Sabha elections. In between all this, a demolition drive has been underway at the Punjab Vidhan Sabha. The aim is to remove and undo the alterations done in the past five decades. The drive is carried out by the Engineering Department of Chandigarh Administration, on the directions of UT’s Architecture Department. The objective is to restore the building to its original status. The establishment is part of the Chandigarh Capitol Complex, which is a UNESCO World Heritage Site since 2016.

During the SAD-BJP’s 2007-12 tenure when Nirmal Singh Kahlon was Speaker, substantial renovation work was carried out in the Vidhan Sabha. At the time, teak wood paneling of all the concrete pillars and walls was undertaken. A new members’ lounge was also built with teak wood partitions and modern furniture. Apart from that, red carpet was laid on the ramps of the building. He said he kept on “beautifying that place” during his entire term. “My only intention was that the place should look beautiful. It is disturbing that they have dismantled everything,” he added.

Now, work is on to dismantle all the wooden panels and alterations. Even LED screens and lights and wall panels have been removed. At present the demolition is being done only in the public spaces, where visitors are allowed, sources said. But all offices, including that of the Chief Minister, ministers and the Speaker, may also be hit by the demolition drive as a large number of alterations were done in the original structure.

Kanwar Sandhu, AAP MLA and chairman of Public Accounts Committee of Vidhan Sabha, said it was nothing but wastage of public exchequer. “Why did people who got the structure altered, or those responsible to check the alterations not act earlier? A lot of public money has been wasted.”

A UT official said the Punjab government was reluctant and it took a lot of time to make it agree to the restoration drive.

Kapil Setia, Chandigarh’s Chief Architect, said that since Vidhan Sabha was given the status of UNESCO World Heritage Site as part of Capitol Complex, “so to retain that status, it was required to remove all the alterations done in the original structure. At present, our emphasis is only on superficial aesthetics but in the next phase, if required, we will start work on the other spaces of the Vidhan Sabha also”.