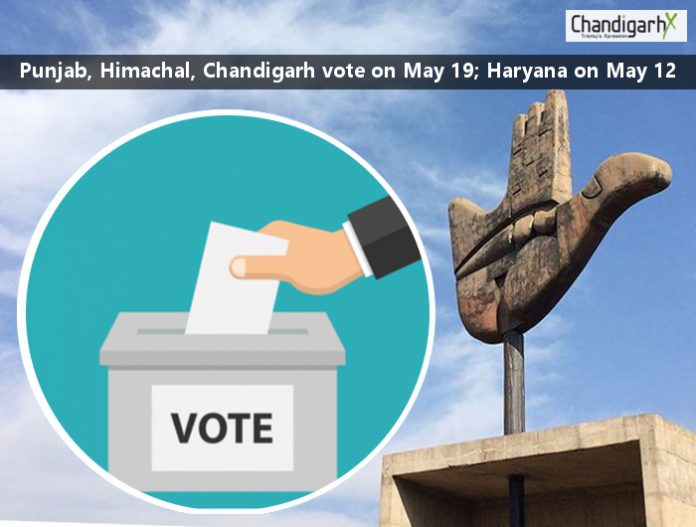 The UT Election Department has geared up for polling in the Chandigarh parliamentary constituency, scheduled for May 19. The Election Commission of India announced the dates for the Lok Sabha elections yesterday, in which polling for the Chandigarh seat has been fixed in the last phase. With the announcement of the poll schedule, the model code of conduct has also come into force.

Ajoy Kumar Sinha, Chief Election Officer, Chandigarh, while addressing a press conference, said 6,19,619 voters were eligible to cast their ballot in the elections, including 3,28,271 male and 2,91,329 female and the remaining transgenders. The number of service electors was 355. He said around 10,000 more  applications were received since the list was prepared, which  were being processed. Sinha said 597 polling stations had been set up in this constituency, of which 212 fell under the sensitive category. As per directions of the Election Commission, webcasting would be done in all polling stations. Around 3,500 employees had been deployed on election duty.

The department has set up a district call centre with 1950 toll-free number on which any  resident can get information regarding the elections. The number will be operational 24X7. The residents can also register their complaints on this number. A control room for the returning officer has been set up on the first floor at the conference room in the DC’s office in Sector 17. The control room shall function as the nodal point for the resolution of all complaints.

A C-Vigil app has been launched by the Election Commission in which residents can lodge complaints relating to violation of the model code of conduct. On receiving a complaint, the flying squad will reach the place within 15 minutes and report back within 30 minutes to the officer concerned. The complainant has to capture the image or video graph the incident so that action can be initiated within 100 minutes.

The nodal officer for monitoring expenditure has also been appointed to check the day-to-day account of contesting candidates. An expenditure monitoring cell has also be created.  Nine flying squads and nine static surveillance teams have been appointed for the three subdivisions of Chandigarh and shall be operational 24X7. These teams will be headed by the Executive Magistrate and shall ensure the enforcement of the model code of conduct. Anil Garg, a PCS officer, has been appointed the nodal officer for the enforcement of the model code of conduct. His contact number is 9815501422,

While the city has added around 40,000 voters since the last parliamentary elections in 2014, taking the total number of voters to 6,19,619, it will be  the  first-time voters who will play  a major role in deciding the fate of the candidates.

Women constitute close to 47 per cent of the total voter base.