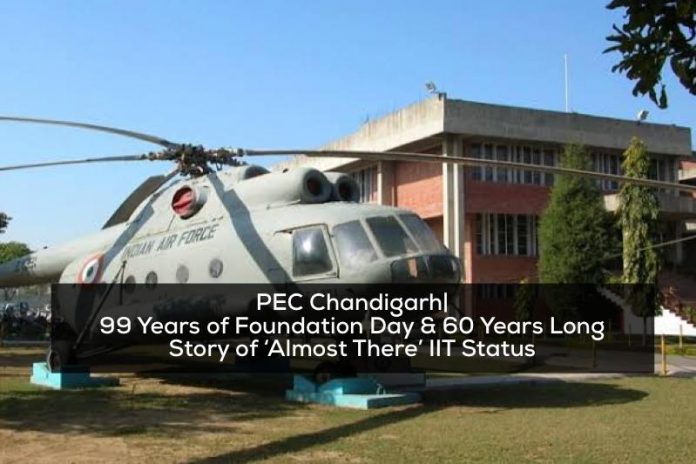 Today, the prestigious Punjab Engineering College, Chandigarh celebrates its 99 years of foundation. Along with celebrating the PEC’s contribution in inspiring and guiding curious minds, what needs special mention is the six decades long story of ‘hit and miss’ IIT status for the institute.

What has always perplexed north Indians why a fine institute like PEC, Chandigarh has not been recognised as one of the stellars of technical education in the country?

Well, not once PEC missed out twice in the consideration.

Sharing the fascinating story of PEC’s journey with The Indian Express, PEC director Dheeraj Sanghi said the institute lost the race first in 1963 and then in 1965.

As per Sarkar Committee Report, IITs were established as cradle of science and technical education to usher the nascent born country in glorious times. IIT-Kharagpur was established unopposed through an act of parliament and other three other at Kanpur, Chennai and Mumbai came up.

This Chandigarh college was the oldest college – East of Thomson College in undivided India, and had an enviable reputation, had a visionary principal, Prof R N Dogra, sent a letter to Government of India asking that it be made the fifth IIT of India.

However, central government in Delhi was weighing options of locations of setting up IITs and two RECs in northern Indian. Kanpur got the IIT, one REC was set up in Allahabad for obvious reasons and there was a proposal to convert Delhi College of Engineering into REC Delhi, but people in Delhi protested. `Thus, the issue for another REC remained unresolved.

Then the second REC of the North was planned for Srinagar, but people demanded city like a stature of Delhi should get a second engineering college. Eventually, the Central government decided to establish an engineering college at Hauz Khas with the help of the UK.

“Soon thereafter, the UK decided to increase its commitment, and the college was renamed as IIT-Delhi. For the Chandigarh college, there was a slip between the cup and the lip. Not only the college in Chandigarh was not converted into an IIT, but its visionary leader was also snatched away and made the founding director of IIT-Delhi,” Sanghi added.

“At IIT-Delhi, the initial architecture/planning/hostel names borrowed a lot from PEC. But while he (Prof R N Dogra) built the new IIT, he remained loyal to his first love. If we could have a fifth IIT, why not a sixth IIT, he reasoned. The government agreed. The date was decided. IIT-Chandigarh were to hold admission process from 1963. But in 1962, the China war happened.

The finances which were already stressed became much worse and the date for conversion was postponed to 1964. Once again, there was a slip between the cup and the lip,” the PEC director explained.

New Condition Added for the conversion to IIT

Later, the condition of Punjab government to continue funding then proposed IIT Chandigarh as it had been for PEC till then. The condition was accepted by then Punjab Chief Minister Pratap Singh Kairon, who had been ardent supporter of establishing of a world-class college in Punjab much before he became CM. He had helped in getting 146 acres of prime land in the new upcoming city of Chandigarh for relocating PEC.

However, IIT-Chandigarh wasn’t the top priority at the moment.

The caretaker Chief Minister of Punjab after independence, Gopi Chand Bhargava, within two weeks of his tenure called a Cabinet meeting and approved that Punjab government would pay the same amount that they granted to PEC that year for eternity. “While it was too late for July 1964 admissions, the Central government decided that IIT- Chandigarh would come into being in 1965,” he revealed.

Even recently, there were talks of PEC Chandigarh to be accredited IIT status but nothing has materialised yet.