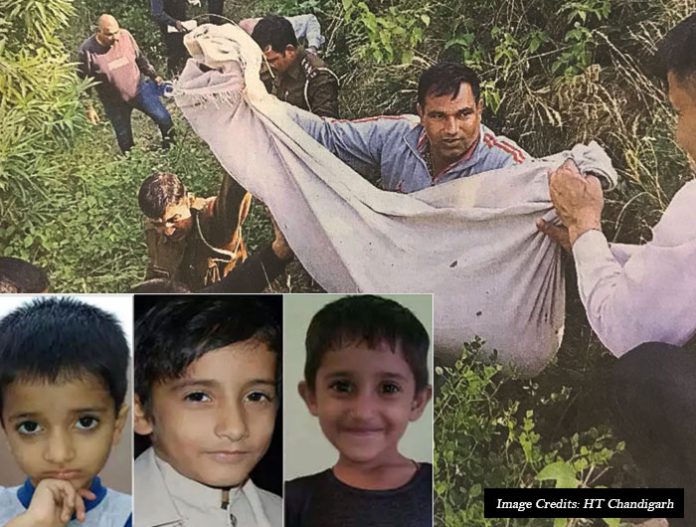 How cruel can one become? How can one kill innocent kids in cold blood? With a reeling mind, bombarded with millions of questions, one can only stagger back to the details of this case.

Three innocent children were murdered brutally and their bodies were dumped in Panchkula’s Morni forest. What has been the most shocking thing in this crime that the accused is the children’s uncle who did it on their father’s behest! The uncle shot dead the children on point-blank range in secluded jungle in Morni Hills.

The three children, Sameer, 11, Simran, 8 and Samar, 3, were residents of Sarsa village in Pehowa block of Kurukshetra.

Why? Why the father took this heinous step?

The reason? As claimed by accused family’s, the children’s father, Sonu Malik, was having an extra-marital affair with a woman from Himachal Pradesh which is the cause of him doing this dastardly act.

Sonu’s father Jeeta Malik revealed that they had a big argument because of this affair. But he presumed that he had counselled Sonu. He never imagined his son could commit such a serious crime because of this issue.

The police has not confirmed the reason but also not ruling it out right now.

How the heinous crime unfolded?

Around 10:30 am on Sunday, the kids were playing near their home. Jagdeep trailed the three children in his Maruti Swift. After that, he coaxed them to come along with him to Gita Jayanti Mahotsav in Kurukshetra. He then drove them to Morni, where he shot one kid at a time keeping the music in the car at high volume so that the children would be unable to hear the sound of the gunshot. After killing each, he dumped their bodies at different places in the jungle.

The Duo Fooled The Cops And The Villagers For Two Days

Suman, the children’s mother raised hue and cry when the children did not return for lunch. Unable to find the kids, the village sarpanch, Karanbir Singh informed the cops.

When Jagdeep returned in the evening, he and Sonu joined the villagers in the search. Zila Parishad Chief Baldev Singh even showed CCTV footage of the area where Gita Jayanti Mahotsav was held. Dharamshalas, temples and sarovars in the vicinity were also checked properly.

The police suspected the duo when they noticed Sonu Malik’s (the father) indifferent attitude during the search.

Police quizzed the two and during interrogation, the uncle confessed the crime. This led police to find the children’s bodies in Morni around 11 am.

The mother and grandmother have still not been informed about the incident.