Home Latest News Chandigarh & Around One Year On, Covid Positivity Surge is Back to Scare Chandigarh
Facebook
Twitter
WhatsApp
Email 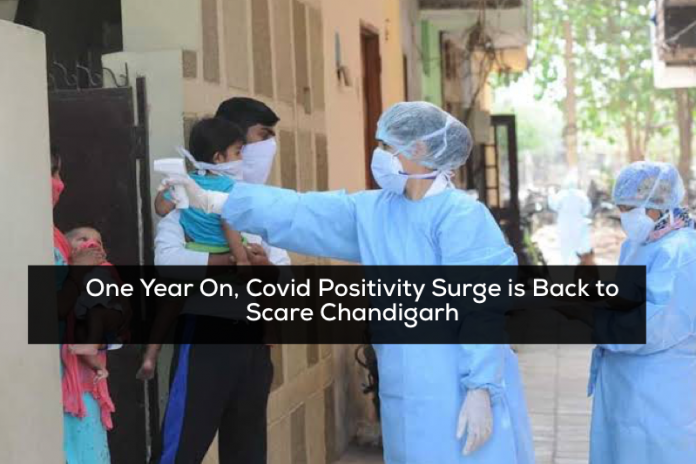 This day, March 18, last year, first coronavirus positive case was reported in Chandigarh. A 23-year-old woman, who had returned from the UK, had tested positive for Covid. Since then, a total of 23,592 city residents have contracted the infection, which comprises 2 percent of the total population. And now after four months of ‘quite relief’ from Covid cases in the city, the Covid positivity rate has risen to become the second highest in the country.

The positivity rate is 7.6 percent, only behind Maharashtra. This is despite UT administration conducting more than the average number of tests in the country.

Health experts have expressed concern over the rising positivity rate in the city. “If more tests are conducted and the positivity rate shoots beyond 5 per cent, it implies that there is an outbreak in the community,” said Dr Rajesh Kumar, former head of the Department of Community Medicine and Public Health, PGI.

In last week, the number of new infections has grown exponentially by an average of 0.6 per cent every day. The growth rate is the third highest in the country.

UT Adviser banking on residents support in controlling the surge

UT Adviser, Manoj Parida said, “We fought a tough battle against Covid and brought it under control without causing much hardship to the common man. The outbreak in Bapu Dham was contained successfully. It is because of the cooperation of the people that our fatality rate has been minimal. We expect to get the same support from the city residents during the second surge. Since we cannot seal our borders, banning entry from outside, our success in fighting corona will depend on the performance of the neighbouring states.”

PGI Director Dr Jagat Ram said, “The pandemic changed the healthcare system as it curtailed OPD services and affected the non-Covid patients. The institute had to start telemedicine to cater to the patients. The Nehru Hospital has attended to close to 3,000 Covid patients. There is a need to prevent this second wave with the help of testing, tracking, and treating Covid patients.”