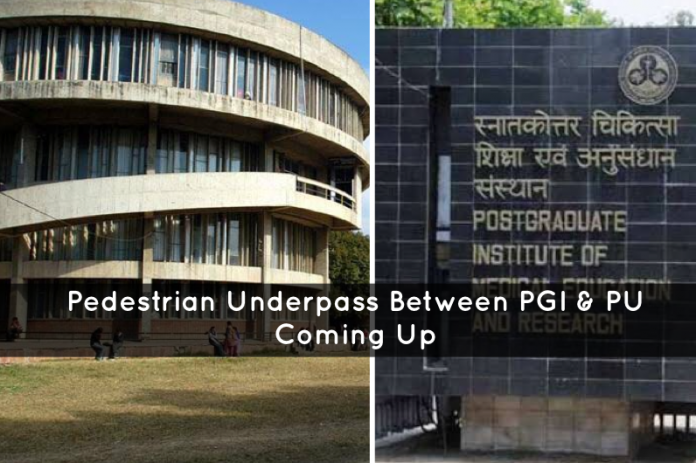 The construction of the pedestrian underpass between Post Graduate Institute of Medical Education and Research (PGIMER) and Panjab University (PU) was officially approved by Punjab Governor and UT Administrator VP Singh Badnore on Monday. The project would cost around ₹3 crore.

Why is this underpass needed?

As per reports from The Tribune, a survey for the construction of the underpass was conducted by the Engineering Department officials after which a detailed presentation was compiled and proposed to Badnore yesterday.

Findings include the following:

After the official approval of the administrator, the process for tender will be started soon.

There will be a lift, escalators and a ramp for easier movement of patients. Pipe and other infrastructure for the underpass were also to be shifted in the course of construction.

Will there be any change in traffic routes for construction?

Alternative routes are being studied to make traffic arrangements in the area.

There are around 10,000 people who visit PGI every day. Panjab University also sees a similar number, including students and faculty.

The UT Administration had already approved this underpass. Badnore’s official nod was awaited which was given in the meeting. The engineering department has already found it pertinent to construct the underpass. According to the Federation of Sectors Welfare Association too, people would use a gap between the divider to cross the area.

Are there any other similar projects in the pipeline?

The UT Administration has planned the following similar underpasses:

On the request of Chandigarh Police, the administration has approved another underpass between ISBT-43 and Sector 52. There is also high volume of pedestrians that cross these roads.

A 70-mt-long and 12-mt-wide underpass connecting Rose Garden, Sector 16 and Sector 17 is almost ready. Its inauguration is scheduled this month. Earlier, it was to be opened for public in the first week of March. However, construction was delayed and it missed several deadlines.

The Indian Institute of Architects (Punjab chapter) said that the construction worth ₹9 crore was “colossal waste of money” as only 133 pedestrians would use it daily.