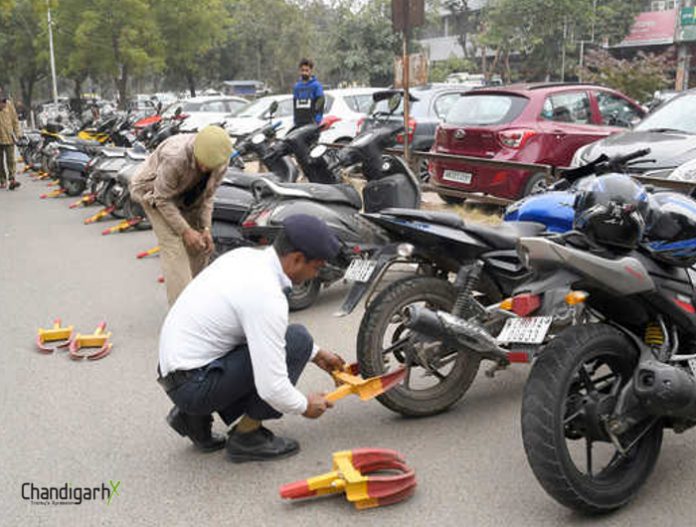 If roads are for use to everyone, why must the onus of parking be on the few. Following the universal law of equality, the UT traffic police have now shifted their focus to clamp down wrongly parked two-wheelers. The drive initiated to crack down on four-wheeler wrong parking in the city, seems to continue with its challaning spree.

Around 29 two-wheelers parked wrongly in Sector 34 were clamped yesterday.

ASI Sarwan Singh of the Traffic Wing, led this drive. In the recent past, he clamped a vehicle of Punjab and Haryana High Court and an SUV owned by the husband of a Punjab MLA.

According to the UT traffic squad, Sector 34 was one of the sectors where wrong parking was rampant. The situation turned worse when two-wheeler riders would also park their vehicles on the roadside. This led to traffic jams. “Two-wheeler riders earlier used to think that they cannot be challaned for wrong parking. However, they will also be penalised for the violation now,” said a police official.

The traffic police, recently have conducted massive challaning drives against parking on roads in various sectors, especially on lanes opposite markets. A traffic cop said that violators were large in number and so, they even fell short of clamps.