Home Latest News No More LalBattis in Whole India From May 1. “Every Indian is...
Facebook
Twitter
WhatsApp
Email 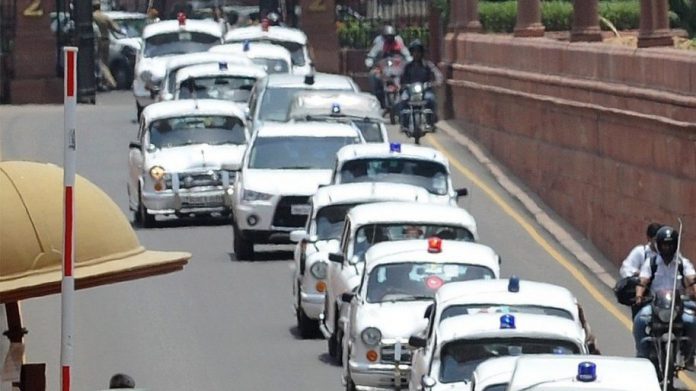 We, Indians, are normally drunk in power. We turn distant relations or no relation at all into a close one if the other person holds a post of power. Getting a note written of being close to him/her or in extreme cases installing a lalbatti on own car!

Now, with PM Modi recent to scrap “VIP culture” in the country, lalbattis are going to be thing of past. From May 1, no one, even any constitutional post holder or any bureaucrat can install it.

NO EXCEPTION AT ALL.

However, the blue beacons will continue that too only on emergency vehicles like fire engines, ambulances and police vans.

The restrictions when the most protected leaders of the country are on the move will also continue, especially the President or the PM.

PM Modi tweeted in regard to this decision.

Lal batti culture prevailing in the country represents the colonial hangover. The general public have to undergo massive inconvenience when they are supposed to make way for “VIPs” in cars with flashing red lights and hooters.

PM Modi demonstrated his own conviction for ending this culture last week, when his convoy moved “in normal traffic” — without any route restrictions or road blocks—to the Delhi airport to receive Bangladesh Prime Minister Sheikh Hasina.

2013: the Supreme Court of India judgment on use of red beacons

The judgment had limited the use of red beacons on vehicles to those holding constitutional offices. Only the president, vice-president, the prime minister, senior judges and some top officials were entitled to the red beacons.

2017: Punjab & UP government decision on use of beacons

The newly formed Punjab & UP government banned the use of red beacon lights atop vehicles in the respective states. Neither any minister nor any bureaucrat would be able to affix any type of beacon (red, blue or yellow) on their cars in the two states.