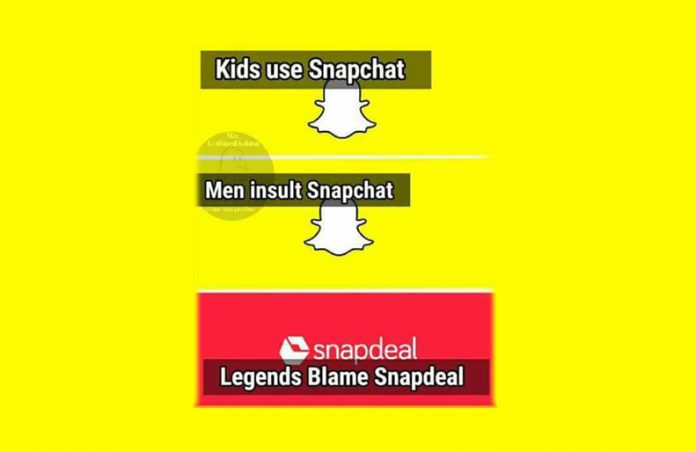 I had an article ready lambasting hard on Snapchat CEO Evan Speigel for his disparaging comment against my country. Then, I found news saying that there’s no on-record evidence of his statement.

And then my disgust turned into sympathy for Snapdeal who for no crime of its own is bearing the brunt of alleged “Poor India” comment by Snapchat CEO. I was only going through the Snapdeal officials statements and I felt sorry and then I burst into laughter.

I’m just in love with the incredibly creative and over-the-top sense of humor of netizens in India. The videos they found and shared on social media within hours of the news of apathetic situation of Snapdeal is just commendable. (Snapdeal, please don’t take me wrong, but have a look and you won’t be able to control your laughter too. )

[ For those who missed the story, let me fill them in. In a lawsuit against Snapchat CEO Evan Speigel by its former employee, it was maintained that the CEO made the disparaging comment in a meeting to discuss growth of Snapchat in countries like Indian. Cutting him midway, he allegedly said, “This app is only for rich people. I don’t want to expand into poor countries like India and Spain.”  The comment obviously didn’t go down well with any Indian and then started a series of uninstalling Snapchat. The similarity of names Snapchat and Snapdeal, the latter has become the innocent victim of ignorant people’s attacks who didn’t care to check what comes after Snap!]

Now, back to the hilarious netizens status updates. See them for yourself and have a hearty laugh.

And those reviews and comments Snapdeal received on its app!

P.S. Remember Snapdeal is innocent. It did nothing!