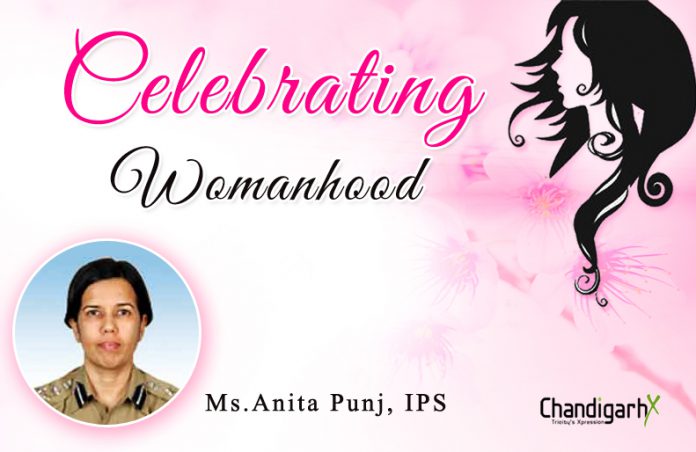 For millennia, men have been happily and the most negligently creating the alpha men world at the expense of women, resulting into imbalanced power equation and the women bore the brunt. The situation has turned so bad that she has come to be known as ‘disadvantaged class’!

But, thankfully girls today are fearlessly and ruthlessly disrupting the men’s world; ‘intruding’ into the world and making them respect for what she is. And defence and police which have always been a male domain are no exception to her confident steps. 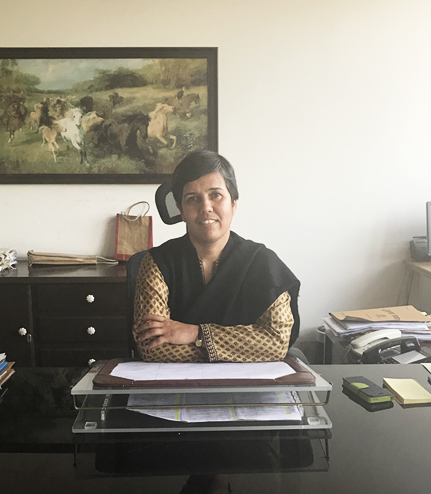 Though born in Dharamshala (Himachal Pradesh), Anita Ma’am spent large part of her life in Chandigarh, studied here in Panjab University and then made into Indian Civil Services in 1994. She chose IPS when there were still not many women in police services and in her cadre Punjab, women police officers were just a few. “I was apprehensive in the beginning because this region is more ‘male-dominated’, if I may say so. The people here are not used to see women in leadership roles, but fortunately I never faced any gender bias in my career ever. Even the public has been very receptive.” She fondly adds “Yes, people may address me ‘sir’, but it’s ok. They are not used to ‘ma’am.”

For all those people, who think ‘IPS is not suitable for woman… IRS or any other service is more suitable’ or even ‘Civil Services is not the career for women. It destroys family life’, Anita Ma’am has a fitting answer to them all in her deeds. She is married, has a daughter and still she has been SP Vigilance at Ferozepur, Deputy Director at the Punjab Police Academy and SSP of Moga and Hoshiarpur districts of Punjab, a UN peacekeeper at the United Nations Mission in Kosovo, a faculty member at the National Police Academy at Hyderabad where she trained five batches of IPS officers, a British Chevening scholar and has led a pan-Punjab programme on Child Rights and Child Protection in association with Punjab State Human Rights Commission and British Council. She has also been an accredited trainer for Springboard Programme conducted by the Bureau of Police Research & Development in collaboration with the British Council for women in police in India.

“He unapologetically believes it is his prerogative to inflict violence on women. He naturally believes him to be an authority over them.”

Her long and illustrious career in police has given her a perspective on gender equality and women safety that even we, living in the very world where it happens, do not realise. “About domestic violence, I’ve seen that the man who perpetuates violence on women in his family especially his wife is not at all remorseful of what he is doing. He unapologetically believes it being his prerogative to inflict violence on women. He naturally believes him to be an authority over them. He has been conditioned to think this way. And the sickening part is that not him, the women are held guilty for what he does. The women victims, on the hand, remain silent. They too hold themselves to be the culprits. How can anyone expect the women to rise or gain confidence?”

She firmly believes that administration, especially police, does have the role in curbing such human rights infringements, but families, society all are partners in this. It’s our social practices, beliefs and child rearing ways that are largely responsible for the women security issues today. “The message has to come across very clearly that any form of violence will not be tolerated. As we have zero-tolerance towards crime, the education system, the families, the media, everything must inculcate and spread this.”

“If not in short term, in not so distant future, things will change, I’m sure.”

Anita Ma’am is still hopeful of the gradual change in the power equation in the home. With more and more women from big cities atleast joining the workforce, the responsibilities at home will definitely be shared. “As a law student back then, I could never understand the co-existence of Right to Equality in Indian Constitution and only sons getting right over ancestral property according to Hindu customary law. But, it took time, things changed. Similarly I feel if not in short term, in not so distant future, things will change, I’m sure.” The more visible women are, the faster will be this change.

She has beautiful message for the youth.

Meeting her I realised strong, powerful women are not born overnight. We need to nurture her, give her space and respect to have a head and heart to speak and have confidence in her when she chooses to take a road less traveled. As Anita ma’am herself shared her stories of childhood. Her parents ensured ‘internal democracy’ within the home and everyone had the freedom to speech and expression and choose where his/her happiness lies.

ChandigarhX is honoured to have her as the Face of ChandigarhX International Women’s Day Celebrations.

More power to her! We, women are blessed to have a role model like her.