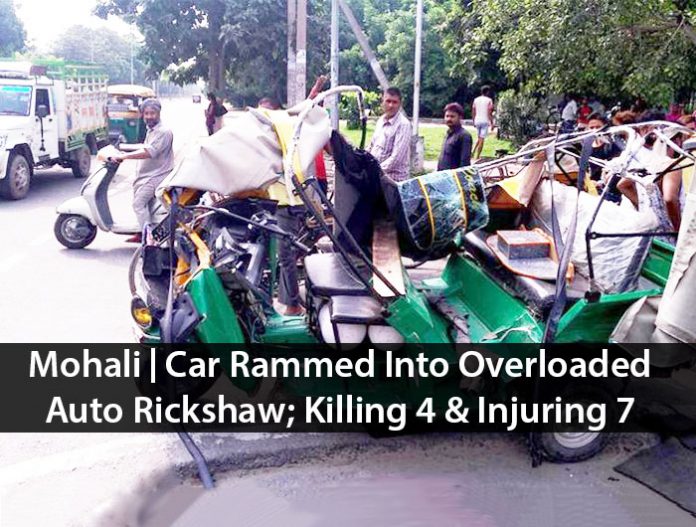 A car rammed into an overloaded auto-rickshaw risking ten passengers’ lives at the light point of Sector 70/ Phase 7 dividing road on Sunday morning. Four persons were killed while seven others sustained injuries. Maximum victims were natives of Bihar.

The SHO received a call at about 7:23 AM regarding the accident. They reached the spot and found that the car was coming from the Balongi side. Identified as Darshpreet Singh, the driver is a resident of Kokri Buttran village, Moga. Along with three friends, he was coming from Shimla in the car. The auto was going towards Matour village when it was hit by the car.
Raju Paswan added that the auto was dragged 50 meters when the car hit. The injured persons were taken to Civil Hospital in Phase VI.

When the accident had taken place, there were 10 passengers and a driver inside the auto-rickshaw. Posing a threat to lives in Mohali, auto drivers are driving insanely in and around Mohali. According to an officer of the District Transport Department, the problem has given rise to a menace in Phases VI, XI, and VII. Here, maximum autos ply daily.

The department’s data reveals that 13,200 autos were registered in the district. This includes Zirakpur, Derabassi, Kharar, and Kurali.

The SHO added that it is yet to be investigated whether the car was beyond the allowed speed limit. None of the two jumped the red lights as the traffic lights were not working at that time.

Raju Paswan, one of the victim said that both vehicles were overspeeding. Thereafter, the accident took place.

He added that after the accident, the ambulance reached the spot one hour late.

‘We came from home to search for work’

As per reports from the Chandigarh Newsline, Inspector Rajiv Kumar, Matour Station House Officer (SHO) said that the victims came to Ambala on Sunday morning. Later, they headed towards Mohali in search of work.