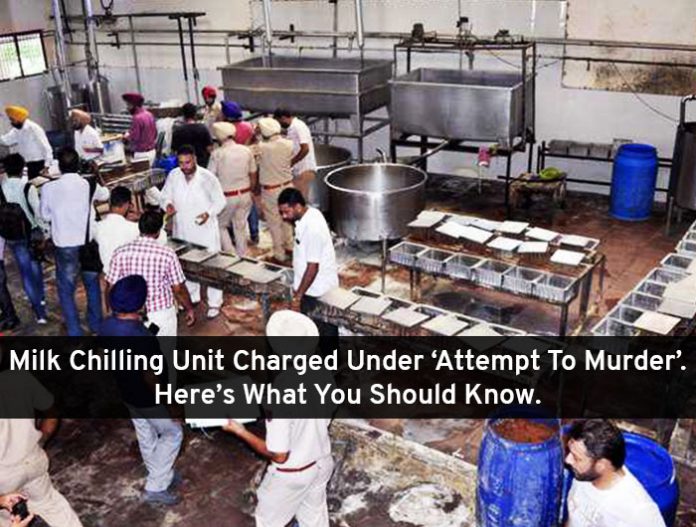 In never-heard-before instance, a milk chilling unit in Patiala has been booked for ‘attempt to murder’. From this itself it can be gauged the intensity and extent of adulteration going on.

In Devigarh (in Patiala), Singla Milk Chilling Centre has been unabashedly continuing its health-risking adulteration practices despite being booked for the same last year. Its milk products have been found to contain high acid and unnatural fat, which as per Health Department’s test reports are unsafe for consumption.

Earlier this month, police conducted a raid at the unit. Milk products were seized and the premises were sealed by the Health Department.

The following chemicals were recovered from the premises:

Booked and sealed last year too

The unit was booked and sealed last year for the same offences. Patiala SSP Mandeep Singh Sidhu added that the owners were aware of manufacturing and selling life-risking products. Still, they continued to do so in Punjab, Himachal Pradesh, and Haryana.

Last year, the Additional Deputy Commissioner (General) allegedly let off the accused with just Rs 4.25 lakh penalty while the fine should have been over Rs 10 lakh. The official is under the scanner.

According to sources, police also found a unit by Singla in Kalka, Himachal Pradesh. The cheese manufactured was supplied to hotels in Shimla and other tourist hubs. Due to high demand there, the owners saw it as a big opportunity to make easy money.

Owners yet to be arrested

In the case filed, the accused are owners Anil Singla, Satish Singla and Honey Singla. They are yet to be arrested. But, their employees Kulwant Singh and Hardial Singh are in police custody.