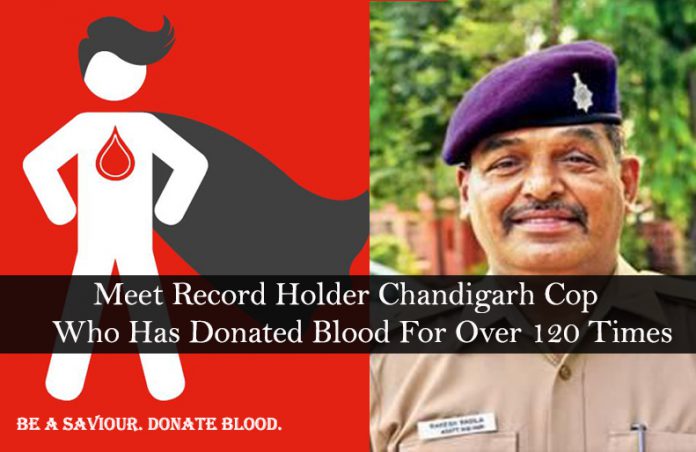 Rakesh Rasila is a true samaritan, not just because he’s a Chandigarh cop protecting our lives, he also is a saviour.

52-year-old assistant sub-inspector in Chandigarh police, Rakesh Rasila, has donated blood incredibly 125 times. He was barely 17, when he first donated blood for an NCC Camp for blood donation in his college. What began in sheer curiousity in 1982, has turned into his calling.

You don’t need to be a doctor to save lives.

There’s always a life-changing moment in our lives. It’s only that some recognise it and others choose to turn blind eye to it. Such a moment came in Rasila’s life when his wife was suffering from chronic disease and he often had to visit PGI. The deplorable state of patients struggling for life just for want of blood and some even losing the battle stirred him to his very soul. It motivated him to donate blood and save lives as many as he can.

“Blood donation is a healthy practice and every individual should follow it, especially youth of our nation.”

“All of my family members also donated blood. My college-going son and daughter have donated blood thrice and twice, respectively.”

What is even more laudable is how he has encouraged others to donate blood. He has motivated more than 150 people to join the cause. “I keep on motivating my fellow police officers. Some of them tell me that they got inspiration from you to donate blood. I had also held motivational lectures in colleges to clear myths related to blood donation among youths.”

He has his credit a world record in 2013 for donating blood  for 117 times.
Rakesh has also won two state awards and two police medals from Chandigarh administration. Rasila was recently honored by UT DGP Tejinder Singh Luthra on June 3.
Source: Times of India
Image Credits: Google Images
Also Read: Social: These NGO’s In Chandigarh Are Making The World A Better Place!