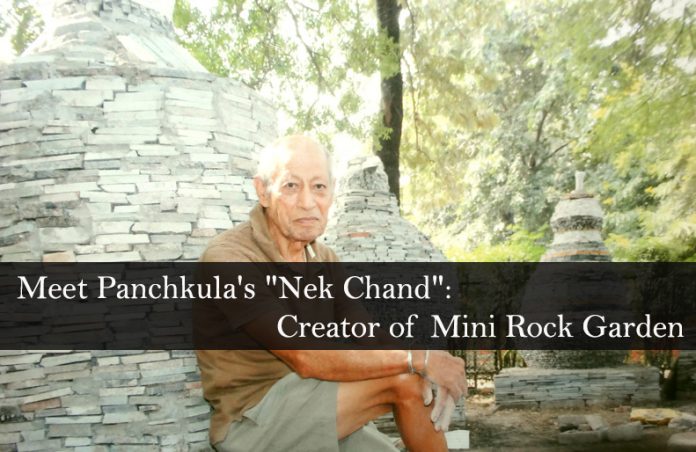 A few decades ago, a common man created a MASTERPIECE that inspired millions across the globe on conservation and recycling in the most beautiful way possible. This man was Sh. Nek Chand Saini and he proudly called his creation “Rock Garden” – an epitome of hard work and creativity mixed together.

Fast forward to present day, another man is living the principles of the visionary creator and working to make our city more beautiful and cleaner for us to live in.

Meet Mr. Prabhu Dutt Gauri, 83-years-old retired bank manager who created a wonderful art out of scrap we habitually throw out. Mr. Gauri is the sole creator of the “Mini Rock Garden” in Sector-12A Panchkula.

ChandigarhX had the pleasure of meeting him in person. 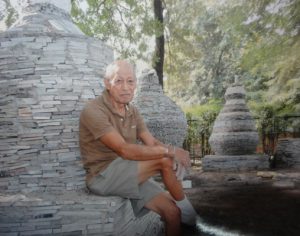 He proudly says,”My aim is to build a more beautiful Panchkula so that it will be well recognized in the country.”

FROM CLEANLINESS DRIVE TO ARTWORK!

Sharing his story, he reveals, “I moved to Panchkula in 1996 and I was pained to see filth and trash scattered all around. Instead of knocking administrative doors, I took upon myself the task of cleaning my surroundings.” What struck me most was how a man can understood his civil and moral responsibility towards society and generations to come. “But, gradually I realised how I can replicate my idol’s principles, so I began creating something or the other from the scrap.” His front yard became his first place to adorn his artwork.

What began as a cleanliness drive became a beautiful artwork. An idea struck him regarding the use of waste rocks and stones. His one of the first creations were a Mountain, Watchtower & Pyramid. 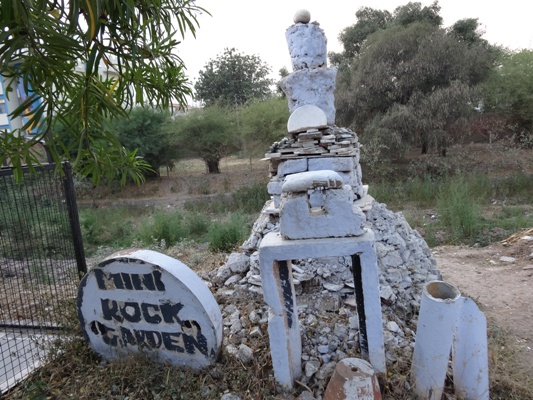 He got encouragement from an Indian Express photographer who was smitten by his work and the name ‘Mini Rock Garden’ was his idea.

Next in line were the Temple, Gurudwara, Mosque, Church. These sculptures are a result of his persistent and honest hard work.

What makes this so Unique?

“…The techniques I use are one of a kind and is not used by anybody in the entire country.”

His work brings him the utmost joy. He maintains that the technique used by him is extraordinary as he doesn’t use any binding agents like cement to make his structures stand. Basically, he uses concrete rocks as his outline and then arranging marble pieces as we do in a game of Jenga.

Mr. Gauri does not use any high-end mechanical instruments and machines. He only uses leftover material from nearby construction sites and arranges them.

“…I myself acquired all the required material I needed in my own car.”

He did all the work from designing to construction to beautification by himself. He is like a “one-man army” who is determined to spread his artistic wisdom as much as he can.

“…After personally visiting D.C. office, showing them the pictures, they were impressed.”

The authorities soon recognized his commendable spirit and his art-form which inspired him to move beyond his front yard. He approached HUDA to grant him some land and resources to expand his work. He was allotted the land in Topiary Park and a Sidewalk in Sector-5, Panchkula. There he assembled more interesting and complex structures such as “A Railway Engine“, “Kulfi Matka“, “ A Stupa” etc.

A tall effigy of “A Human” and “A Bird” decorates the sidewalk in Sector-5, Panchkula.

THE BEST IS YET TO COME!

“…During my travels, I constantly look for ideas and challenging things to build.”

Mr. Gauri regularly visits different places and countries and look for inspiration. He has tried to replicate the famous “Merlion” during his trip to Singapore. On his trip to Europe he was awe-inspired by the Face Waterfall in Swarovski Crystal World, Austria. His heart is set upon constructing the same in Town Park in Panchkula.

He will soon start building “Burj Khalifa” which inspired him on his visit to Dubai and other to soon follow are Camels, Cactus, Pillars etc.

His eyes twinkled with satisfaction as he shared with us his dearest creations.

THE JOURNEY HAD ITS HARDSHIPS

“…I regularly visit the SCO Office to ask for material and labour. My health does not allow me to lift heavy objects. I am promised that I will get the material very soon.”

The only thing hindering his work is lack of support and resources from the authorities. But he is still hopeful and resolute.

“…Initially people called me a ‘mad man’, but they eventually started appreciating my diligence.”

The path of success is laden with hardships, but only the resilient, diligent and strong resolute can make you win over the world. His journey is one similar story too.

As we very well know, there is no success without hardships. And it is this determination that kept him going.

WORDS OF WISDOM FOR THE YOUNGER FOLK

With his eyes glistering with contentment, he says,” One should achieve something that will inspire the generations to come. Everyone has the talent but it depends on how you discover it.”

Mr. Gauri had a dream of meeting Mr. Nek Chand once but it couldn’t be fulfilled. But destiny had other plans to reward him for his diligence. In the year 2006, he was awarded with “Nek Chand Excellance Award“.

As Gandhi once said,”Be the change you wish to see in the world.” This man is a living example of the same.

⇒ If you want to see his beautiful work, head to Topiary Park. Also, next time you are waiting at Sector-5 lights, have a look at that magnificent sidewalk. More than anything else he needs our love and appreciation for what he has been doing for years.