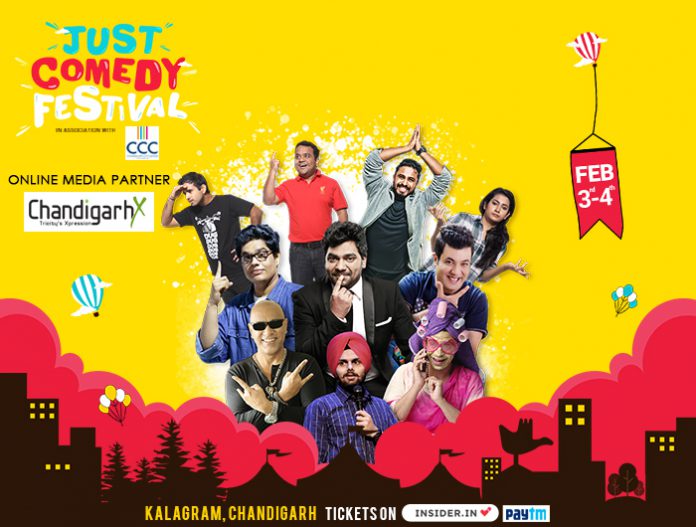 Tricity is all set to go from kiddish chuckling to giggling to crazy guffaws. And the reason is equally insane. It’s not just any comedy night with one or two standup comedians but a two days long Just Comedy Festival in Chandigarh – Comedy Carnival with India’s 10 best standup comedians and most fun games, comedy workshops & sessions, discovery stage, photoups and much more.

The whole gang of comedians, each with a flawless signature wit to roll the audience on the floor laughing, are coming to Chandigarh.

He is literally the Shahrukh Khan of the standup comedy industry, heart-throb of millions and yet ‘Haq Se Single’.

The Ranbir Kapoor of Comedy industry, Kanan has got killing wit and such drooling looks… every girl’s prince charming.

This ‘Son of Abish’ has the wit to die for. What you enjoy the most about him is how well his expressions are synced with his comedy.

Remember AIB Roaster with Ranveer Singh and Arjun Kapoor? And you must remember that ‘butt cheek’ Bhat, well that’s the brain behind AIB and he’s coming too.

The middle aged woman with green mask on her face, a towel wrapped around her head weirdly enough hair rollers stuck on top of that and gigantic pink coloured glasses rested on her nose, always busy gossiping with her “Sarla Bhenji” – Yes, that’s our Pammi Aunty. Her satirical videos already a rage on social media.

This Mumbai girl knows how to take on male chauvinistic world; not with any blatant anger but with her sarcasm.

Don’t be deceived by his gullible looks, he is one funny guy who can make his audience laugh even on things they think as mundane.

When this Punjabi munda from Delhi shares his life with his signature comedy style, you will break into laughter not just because of his joke. Also because you’ve been there too.

You have seen him make you giggle on-screen, now see him LIVE. Check what stuff his comedy is made of in this video.

Saving the best for the last. Much before Honey Singh and Badshah of today, Baba Sehgal had make us groove on his raps and not to miss the rib-tickling humour in them.

ChandigarhX is proud to be associated as OFFICIAL ONLINE MEDIA PARTNER of JUST COMEDY FESTIVAL.

ABOUT THE ORGANISERS: JUST COMEDY

Just Comedy is our very own home grown comedy festival which is creating waves in standup comedy industry. The best thing about Just Comedy is that their podium is open to new talent. All you need is the wit to roll your audience on the floor laughing, and rest is their job. In just an year, Just Comedy has carved a niché for itself for being the best standup comedy show in the country. From tricity, it has been on its hopping laugh ride tour to all major cities in the northern region.

See you there, Tricity. This is for sure the best way you can spend your weekend.