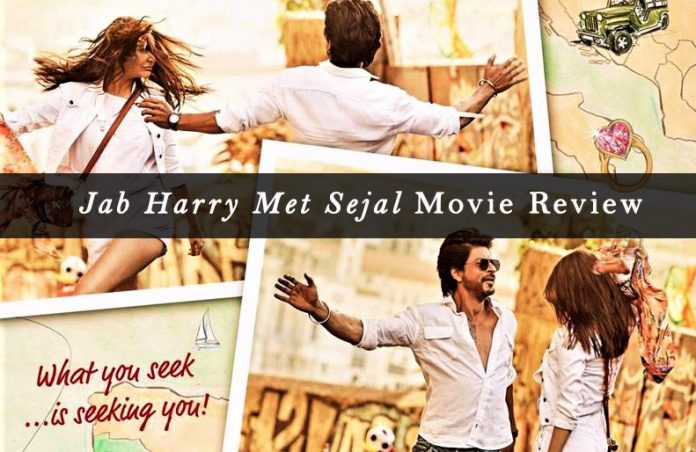 Even after 22 years Shahrukh is still that Raj from whom you can not help but falling in love. He will make you believe that there is a perfect kind of love. That Happily ever after exists. With the most talented names in the industry coming together in one movie, you are bound to expect some magic being created on-screen and with Imtiaz Ali himself being the great wizard being in charge you hold your breath to be swept off the floor. But, here nothing happens, no magic spells only magical locations, rest is tasteless and a big disappointment.

How Harry Met Sejal and What Really Happens

The title ‘inspired’ from Imitiaz last blockbuster ‘Jab We Met’ already rises the expectation for something amazing to come up, but is it?

Harinder Singh aka Harry (Shah Rukh Khan) is a womanizer and cynical creep who is on the verge of having a mid- life crisis. Sejal (Anushka Sharma) who is a gujrati girl, ditches her flight out of Amsterdam to find the engagement ring she lost somewhere in Europe. Huh?

An easy task I guess.

Harry has slept with his lady clients and would be deported back if got any other complaint. He candidly warns Sejal about his creep like disposition. The brave girl tells Hairy (that’s Gujarati accent speaking), ” I can control boss anyone, anywhere and anytime.” But maybe she forgot he’s SRK, he can even make straight men fall for his charm. They go to these picturesque locations Amsterdam, Prague, Budapest, Lisbon and Frankfurt and cinematographer KU Mohanan delivers on the visuals.

There is a night club spat with Russian gangsters, a tasteless Lisbon experience with a shady Bangladeshi crook and a dost ki shaadi in Frankfurt which is as shoody as evelyn sharma’s acting. I still have no idea why was she even in the movie.

So a handsome man and a beautiful woman on a journey to find something.

Ain’t this the crux of every Imtiaz Ali film?

I felt he didn’t even work a bit on the story. It is all that is in the trailer and it makes little sense. Obviously, the ring is just a metaphor and they are trying to find each other in the journey. The chemistry between the two is all that is good in the movie. In one scene after waking up SRK tries to cry in the corner and then explains why Punjabi singers sing loudly and absurdly breaks into a song.

I doubt if Ali was even there at the time of the final edit.

Sejal keeps insisting that she is loyal to Rupen(her fiancé) but also keeps pressing Harry to admit she is “layak“(worthy). There are so many mind games and complexities between the two characters. Ali wanted us to find something even in nothing.

The songs which have always been a highlight of every Imitiaz’s movie are no good too. They come and go, and except perhaps for a couple, they don’t really register.

Actually, they tried to fit everything in the movie that is resulted in nothing. Imtiaz doesn’t try to move out of his comfort zone of story telling. There is normalcy in his characters and how he masterfully peels layer after layer and reveals the naked unbalanced person underneath. You find his characters relatable, be it Geet from Jab We Met, Veera from Highway or Tamasha‘s Ved. I wish Harry would have been in a different film because the story has nothing to hold. Imtiaz and SRK coming together should have created a romantic classic but he has made his weakest film to date.

Still,  5 BEST ATTRACTIONS OF THE MOVIE:

Sally would be pretty delighted as Sejal and Harry’s jodi is a disaster. Go back to Sally, Harry.