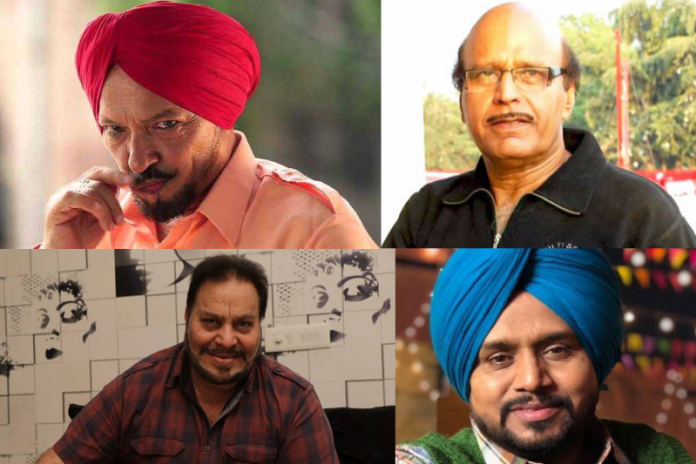 The lead actors, music – the loosely popular attractions of any movie – may bring the cinema lovers to the halls, but it’s the story that keeps them gripped till the end.

Yes, whatever era we may live in – CONTENT is the KING!

In the reel world, protagonists may garner all the praise and limelight for a successful movie but had there been no steller performances by the supporting cast to cast lights on the lead actors, the latter could never have outshined.

Punjabi film industry is no different. The actors playing character roles have proved their mettle to carry the movie on their able shoulders.

ChandigarhX had the pleasure of interacting with four such excellent actors who have been instrumental in the glory that Pollywood is earning today.

Remember Agneepath, Sadak, Aashiqui, Noorie, Daddy… all these movies had a Punjabi lad risen from suburbs of Ahmedgarh (in Ludhiana) in them – Avtaar Gill.

Undoubtedly, one of the most known faces in Indian film industry, Avtaar Gill has graced the silver screen with his stellar performances in 283 movies in eight languages for over four decades.

Sharing his journey with ChandigarhX, he talked about how theatre has helped him in giving strong foundation as an actor and groomed him over the years to create a nichè for himself as a character role, a bankable actor. The defining roles with whom the audience could connect and he won accolades have been from TV series ‘Nukkad’, ‘Taara’, ‘Ye Jo Hai Zindagi’. He proudly talks about his plays, “Shatranj Ke Mohre”, “Taj Mahal ka Tender”, “Biwi O Biwi” that are popular with the audience since last 40 years.

Talking about the stress and struggles in film industry, he says that few projects are not a guarantee for future ones too. But what keeps him going is his love for the art, old movies songs and poetry, especially written by Bashir Badar, Faiz, Faraz, Meer and Mirza Ghalib.

Academically inclined Rana Jung Bahadur fared well in his studies and had a secured government job but his love for theatre and acting made him leave his job and pursue his dreams.

Not many people know that he is a good singer and would have been the same if not an actor. “My father was a granthi in a gurdwara in Malerkotla and I used to visit along with him to the keertan and play tabla”.

After struggling for five years in Mumbai, he got a break in ‘Yateem’, ‘Hathiyaar’, followed by many B or C grade movies. But what turned out to be turning point in his acting career was his role of ‘Jarasandh’ in television series Mahabharata. It was followed by ‘Yalgaar’ movie by Feroz Khan.

Sharing his early days struggle in Mumbai, he said, “I was offered a role in first TV serial ‘Hum Log’ but I refused to do it because I wanted to make my career in films and I had just shifted to Mumbai and the serial’s shooting was in Delhi. I did not want to move out when I had not even started.”

His contribution to Punjabi cinema is unforgettable. He played an instrumental role in making the first Punjabi film ‘Chann Pardesi’ see light of the day.

He has closely seen and participated in the evolution of Punjabi cinema to this day and has high hopes seeing new talents and growing professionalism in the industry.

A typical movie plot would go… Kid born in family of doctors would be conditioned and expected to focus on studies only. Movies, theatre, acting are a taboo. But, Sardaar Sohi had a real-hero father who gave his son the confidence to follow his heart. His love for acting made him join renowned theatre artist Harpal Tiwana’s theatre group and in no time his talent made him one of his mentor’s favorite.

“It was my dedication towards acting that Tiwana compelled me to play the role of Lord Hanuman in Ramleela that too in Punjabi. I was shocked as I was very skinny that time. So to prove his confidence in me I worked on the character and gained so much appreciation for it,” he reminisced.

Known for his raging eyes in a villian role, he is looking forward to act an emotional role that suits his age.

Though he is a well-known singer with many hit songs in his kitty, still he jumped into acting to earn money “as back then singers themselves had to shell out money for their music albums.”

About his journey he affirms that while he was in college he used to sing and perform skits along with Bhagwant Mann, who was his senior.

Karamjeet is happy the way his career is shaping up and different characters are being written for him.