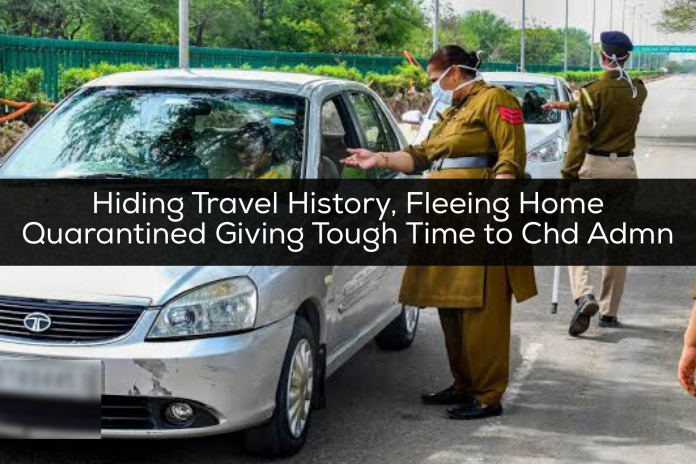 With COVID-19 positive cases in Chandigarh already touching 8, the no self-reporting and hiding foreign travel history is giving a tough time to the administration.

UT Administrator VPS Badnore revealed in a press conference on Saturday that earlier the list of people who had come back to Chandigarh from abroad was 1,600 and later it was updated to 2,200. Out of these, administration’s focus was on those who had returned after March 14- 675 people. While 626 had already been home quarantined, 30 were stamped on Sunday and given instructions to self-isolate in their respective homes.

However, 19 are still to be traced.

A senior official revealed, ” Some of them were not present at the address mentioned in their passport.”

Identified as a 22-year-old man from Sector 30, Chandigarh, he had returned from Dubai on March 11 and self quarantined for 14 days. He developed symptoms on 10th day and was hospitalised on 15th day. As many as his 81 contacts have been traced and quarantined.

27-year-old Sidak Singh Sandhu of Sector 10 (who is a permanent resident of Canada) did not self-report about his travel history nor did he follow the self-isolation guidelines. He has been held under Section 188 (disobeying order of public servant) of the Indian Penal Code and arrested but was later granted bail.

His samples have been collected. He, along with his family have been home quarantined. Also the two police officers who arrested him are asked to self-isolate. His contacts are also being traced.

A resident of Gandhi Colony in Mansa Devi Complex (MDC), 28-year-old Gajinder was found missing from his house during official checking attendance.

He was advised to home quarantine when team of doctors from Civil Hospital suspected of being symptomatic.

Upon investigation, it came to be known that he, along with his family, left without telling anyone.

Police maintained that he had reportedly left for his native village and will be traced soon.