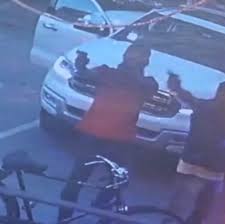 The bystanders ran for cover, some running into nearby shops for protection. Two people are wounded and taken to PGIMER, Chandigarh. Then the attackers went to a car parked a few metres away where their accomplices were waiting, and drove away, police sources said.

Police are now going through footage from security cameras at the market to identify the attackers.